Water Valley opens 3A playoffs with rematch against Yazoo County 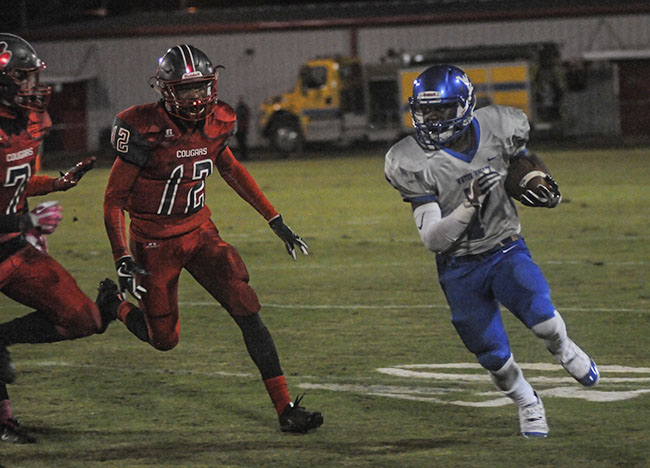 Water Valley's Martavious Rockett (7) runs after making a catch in the first quarter against North Panola in Sardis on Friday. (Jake Thompson)

OXFORD — The regular season ended on a sour note for Water Valley. North Panola outscored the Blue Devils 34-0 in the second half to secure their second Region 2-3A title last Friday. It was the second loss of the season for Water Valley and the most lopsided one.

Luckily for the Blue Devils (9-2) they are able to start fresh with the MHSAA Class 3A playoffs beginning this week. It presents the opportunity to forget about last week in Sardis and get the taste of defeat out of their mouth, something that did not happen immediately, but over the course of the weekend.

“It’s kind of a tough one to overcome,” Water Valley head coach Brad Embry said. “I think we were much better (Monday) at practice. It’s something they’ve got to learn to trudge on, move forward and put that behind us. Kids are resilient. They know everybody’s 0-0 now. That’s the truth, in reality it doesn’t matter if you’re undefeated and lose in the first round of the playoffs. Now, we’re in and we have a home playoff game and the third season begins.”

For the second straight season, the Blue Devils picked up nine wins after winning only two games during 2016. The program turnaround was halted last season by eventual 3A runner-up Yazoo County. The Blue Devils had to make the trip to the Panthers for a second round match up last November. After a close first half, Yazoo County pulled away in the final quarter for a 35-7 win.

This season it is a changing of fortunes with Yazoo County making to the trip to Water Valley for a first round showdown on Friday (7 p.m., 105.5 FM).

The Panthers (5-5) finished 3-2 in Region 3-3A to earn the No. 3 seed out of the region. It was an up and down year after a 2-3 start in non-region play. They missed the production of Kenny Gainwell, who they lost to graduation from a season ago. The 2017 Class 3A Mr. Football was responsible for 2,973 total yards of offense and 42 touchdowns (32 rush, 10 pass) for the Panthers last year.

Senior Cameron Shaffer and junior Kobe Fisher now share the passing duties. Each has thrown for 189 yards, but Shaffer has played in all 10 games while Fisher in only four.

“They’re huge and athletic,” Embry said of Yazoo County. “They’re a good football team and we’ll to play pretty well. That region’s tough. It’s not top-heavy, all four of those teams can play and they’re a third place team. You look at them on film and they don’t look like a third place team. Our kids know that. They like to watch film and they know when they see a good football team”