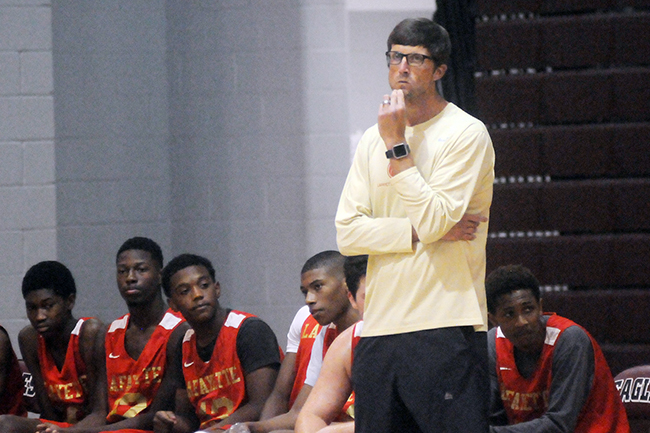 OXFORD — Brad Gray feels like he is starting all over again, mostly because he is.

The former Senatobia boys’ basketball coach is entering his first year at Lafayette in the same position.

Gray steps into the role after John Sherman announced his retirement at the end of last year.

Even though he has been in this position before, there is still a wave of emotions that overcomes him.

“I don’t think there is a word in the English language to describe the emotion you feel,” Gray said. “It’s a combination of things. You’re excited; it’s the first game in a new season. Feels like your first year as a coach. You’re nervous for the kids, you’re nervous for the program. As a coach you always kind of second guess yourself and think of things you should’ve covered and should’ve worked on. Sometimes you’re a little scared because the uncertainty of not knowing what you’re going to get.”

Sherman took over the boys’ team in 2015 and managed to get the Commodores back to the playoffs and began to turn the program around.

Now, it is Gray’s job to finish what Sherman started.

Gray was hired in early April, giving him the entire summer for him and his team to adjust to one another.

“I think the summer was good for all of us, mainly for the guys to get to know me and me get to know them,” Gray said. “They kind of understand what’s going to be expected of them and how our team is going to play and conduct itself on the court. Play with max effort and play the game the right way. That was kind of what the summer was for. Now, we’re trying to fine tune some things and put in some offensive stuff, some concepts and things like that.”

The first month of the season will be a challenge for Gray. With Lafayette’s football team starting their playoff run on Nov. 9, he will be missing a good portion of the roster until they are eliminated or win their second state championship in three years.

Until then, Gray will be working with the players he has and using the first month to build depth for his bench once the football players return to the court. Lafayette plays six games in November and if the football team makes it all the way to the state championship on Nov. 30, Gray could be without his players for a couple games into December.

“Lack of depth is going to hurt us, especially early on,” Gray said. “We’re going to play at a pretty fast pace, so we’re going to try to get up and down the court a good a good bit and that always helps with the more fresh legs you have over there on the bench. When you can go 10 or 11 deep that makes your pressure a lot better and that makes your transition game a lot better. Early in the season we may have to modify a few things a little bit.”