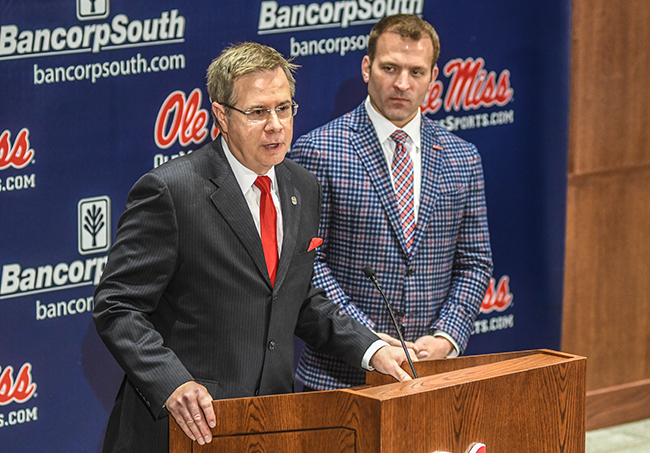 University of Mississippi chancellor Jeff Vitter, left, and Vice Chancellor for Intercollegiate Athletics Ross Bjork discuss NCAA sanctions leveled against the foot program during a press conference at the Manning Center, in Oxford, Miss. on Friday, December 1, 2017. The university announced that it would appeal the sanctions during the press conference. On Thursday, November 1, 2018, the university announced that the NCAA overturned the unofficial visits restrictions but upheld the bowl ban. (Bruce Newman)

The case is officially closed.

The ruling brought mixed news for the Rebels, who sought to remove or reduce some of the tougher sanctions issued by the NCAA Committee on Infractions (COI) last year. In the ruling, the IAC overturned the biggest sanction levied by the COI, lifting the restrictions on unofficial visits by recruits. However, the IAC upheld the two-year postseason ban.

With the IAC upholding the COI’s initial ruling for a 2018 bowl ban, Ole Miss will be ineligible for postseason play should the Rebels hit six wins this season. Currently, Ole Miss holds a 5-3 record, with four games remaining in the 2018 football season.

The process for the University’s appeal case lasted nearly 11 months.

“Today, the NCAA released the Infractions Appeals Committee (IAC) decision, bringing the nearly six-year process to an end,” a letter co-signed by Ole Miss chancellor Jeffrey Vitter and athletics director Ross Bjork read. “The university prevailed in its appeal of the most onerous sanction, the penalty restricting unofficial visits. According to the IAC, ‘the Committee on Infractions (COI) abused its discretion when prescribing penalty VII.5.c (unofficial visit restrictions) in that it was based in significant part on one or more irrelevant or improper factors.’ The IAC overturned the penalty entirely, clearing the way for the football program to move forward and continue recruiting at a high level.”

“While we are pleased by the IAC’s finding that the COI abused its discretion with respect to the unofficial visit penalty, we remain disappointed by the remainder of the ruling, which upheld a 2018 postseason ban and findings of lack of institutional control and recruiting inducements,” the letter continued.

With the postseason ban being upheld, it will be the second consecutive year Ole Miss’ season will conclude with their yearly meeting against Mississippi State in the Egg Bowl. This year’s edition of the rivalry will be played on Nov. 22 at Vaught-Hemingway Stadium.