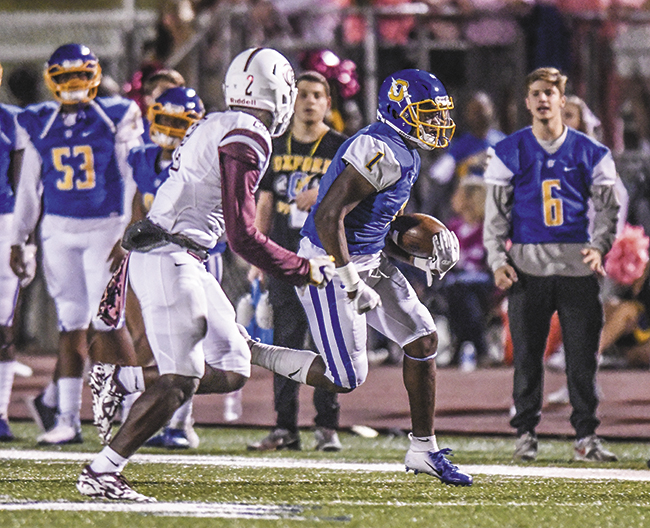 OXFORD — As Oxford enters the final week of the regular season; the mood is a little different than last year.

When the Chargers traveled to Tupelo last November it was a win-or-go-home scenario as a victory would earn them the two-seed and a loss would end the season.

The latter happened and the Chargers’ season ended without a trip to the playoffs their first year in Class 6A.

This year the possibility of missing the playoffs is not a part of the equation, but there are still seeding implications when Tupelo travels to Bobby Holcomb Field tonight for Oxford’s senior night. If the Chargers (8-2, 5-1 1-6A) win they will clinch the No. 2 seed out of the region and host a first round playoff game next week. If they lose they are still in the playoffs, but there will be some scoreboard watching to see where, and who, they will play.

The comeback win at Hernando last week has allowed the Chargers to still be in control of their destiny in the final week of the regular season.

“Hopefully this time around we’re still improving at the end of the season, which I think is the key as you head into the playoffs,” Oxford head coach Chris Cutcliffe said. “We’ve been in some crazy games this season and I think we play with confidence when we get in those scenarios. I think we definitely have some things to improve on as we looked at the Hernando film, but I do think we gained some confidence.”

Oxford and Tupelo’s (7-3, 4-2) seasons have mirrored one another. Strong non-region starts, paired with strong showings in region play kept each team in the hunt for playoff berths. For the Golden Wave, the path to the No. 2 seed is not as simple as Oxford’s. A win puts Tupelo ahead of the Chargers in the head-to-head tiebreaker, but the Golden Wave will also need a South Panola loss to DeSoto Central to finish second in the region.

Tupelo got a boost two weeks ago when quarterback Stephon McGlaun returned from injury.

McGlaun played in the season opener at Meridian but suffered a leg injury that kept him out for nine weeks. Since his return, McGlaun has thrown for 225 yards and a touchdown. He also threw an interception against DeSoto Central on Oct. 18.

In McGlaun’s absence, Tupelo relied on backup quarterbacks and also standout running back Jaquerrious Williams in a wildcat package.

“We’ve seen some of those other guys throughout the year, but McGlaun is a big-time player,” Cutcliffe said. “You can just look at his record as a starting quarterback at Tupelo and that tells you all you need to know. They do play (Williams) in the wildcat stuff, but I think they’re fired up to have McGlaun back and I think that’s the guy that they’ll go to war with.”ford