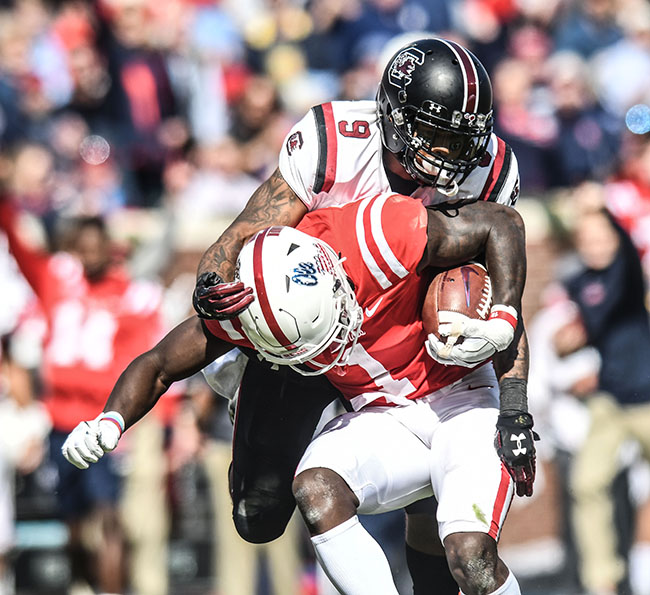 OXFORD — There were no late-game heroics from Jordan Ta’amu on the first Saturday of November this year.

Three straight passes fell to the ground and sealed Ole Miss’ fate in the final seconds of their 48-44 loss to South Carolina at Vaught-Hemingway Stadium. South Carolina rallied from 10 points down by scoring 14 points in the final 11 minutes of a game that was a shootout from the onset.

“We didn’t make the plays we needed to make,” Ole Miss head coach Matt Luke said. “In a game like that there is going to be a thousand different things that we can point to that could have changed the game. They made the plays they needed to make, we didn’t.”

Isaiah Woullard’s one-yard touchdown run put the Rebels (5-4, 1-4 SEC) up by 10 points in the opening seconds of the fourth quarter. The offense, which had success all day, was held to three punts and a turnover on downs in their final four possessions.

The Rebels had 598 yards of offense in the first three quarters but were held to 18 in the final 15 minutes.

On their ensuing possession following Woullard’s touchdown, South Carolina answered with a three-yard run by running back A.J. Turner. Jake Bentley scored the game-winning touchdown on a four-yard run with a little under six minutes left in the game.

“I think everybody gets better week-to-week. When you give up 48 points it’s hard to say that, but I do think the kids were out there working,” Luke said of the defense. “They gave us a chance to win the football game. They bowed their neck on a 4th & 1. We had a chance to win the game in the fourth quarter.”

The teams combined for 1,126 yards and 11 touchdowns on a day where defense showed up at times but was relatively useless. The tone was set on the opening kickoff when South Carolina’s Deebo Samuel returned it 90 yards for the touchdown in the first 17 seconds of the game.

Jordan Ta’amu accounted for 445 of the Rebels’ 616 yards of total offense. He threw for 379 yards and ran for 66 yards and a touchdown on 21 carries. Elijah Moore had 129 receiving yards on 11 catches and Scottie Phillips rushed for 141 yards and three touchdowns on 21 carries.

In the first half Ole Miss was the team who rallied to keep the game from getting out of hand early. The Rebels trailed by 14 points late in the first quarter and scored 24 points in the final 17 minutes of the half to tie the game at 27 at halftime.