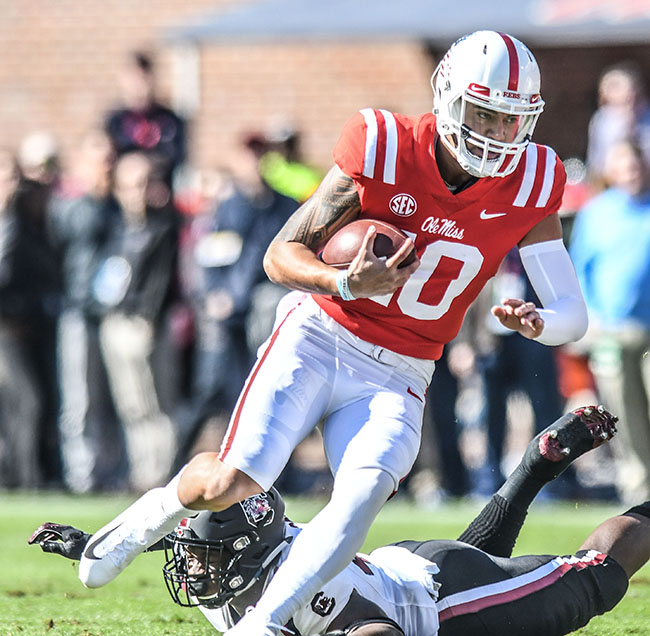 OXFORD — The news was much better for Ole Miss’ starting quarterback than some feared over the weekend. During his weekly press conference on Monday, Ole Miss head coach Matt Luke announced Jordan Ta’amu was ok following the Rebels’ 48-44 loss to South Carolina.

Ta’amu was banged up in the second half and came out for a series, giving way to freshman Matt Corral, but returned and finished out the game.

“It was a very physical game on both sides of the ball but there wasn’t anything major for us,” Luke said. “Ta’amu’s foot, in terms of practice will be limited but he’ll be fine to play (at Texas A&M) on Saturday.”

Midway through the fourth quarter, Ta’amu left the game to allow trainers to check on him and wrap his ankle. Corral attempted two passes on the drive, both of them incomplete to A.J. Brown and DaMarkus Lodge.

Ta’amu re-entered the game for the Rebels’ final two drives. After recording nearly 600 yards in three quarters, the Rebel offense managed only 18 yards of total offense in the final 15 minutes.

“Truthfully, I think we were in a more predictable situation in the second half of the fourth quarter,” Ole Miss offensive coordinator Phil Longo said on Monday. “The truth is, the quarterback situation there kind of blew our rhythm. We had a rhythm for three and a half quarters. (Ta’amu) got lumped in one drive, so Matt got thrown into the fire right away. …I just think changing there and him having been hurt definitely affected some rhythm on offense.”

Ta’amu will be very limited at practice this week leading up to the Rebels’ game in College Station. That means Corral will get most of the snaps and former quarterback-turned-tight end Jason Pellerin will also get snaps behind Corral as a ‘break glass in case of emergency situation.’

With Corral playing last Saturday, it burned his third of four games allotted to true freshman before getting the redshirt tag. Corral has one more game he can come into without penalty, but if he plays his fifth game of the season it will kill his redshirt eligibility.

“If we need him, Matt’s the guy,” Luke said. “I think Jordan is going to be fine but we’ll keep him limited this week to just get him healthy. It’s not an injury that we think is going to keep him out of the game.”

Wide receiver Braylon Sanders also suffered a foot injury on Saturday and will be limited in practice this week. Luke said Sanders will be a game-time decision against Texas A&M