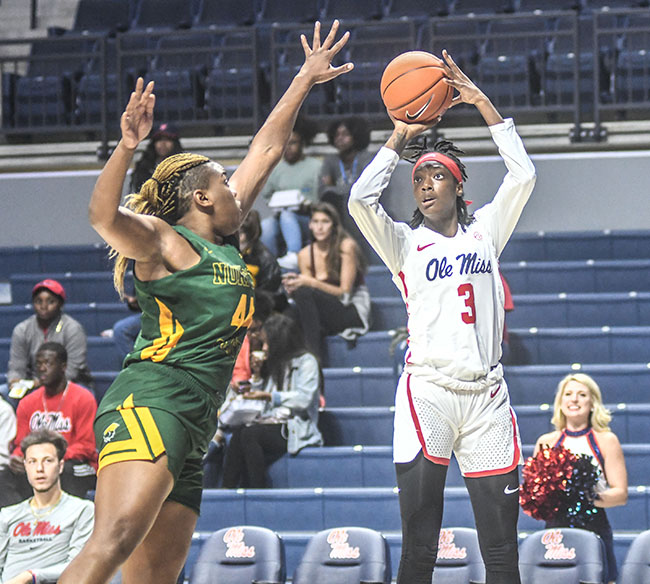 OXFORD — Moments after the final buzzer sounded, Yolette McPhee-McCuin grabbed the microphone and thanked those in attendance and told them Ole Miss was a ‘work in progress.’ The first-year coach believes in transparency and in the Rebels’ 60-42 win over Norfolk State in the their season opener on Tuesday she told it how it was.

The Rebels (1-0) got punched in the mouth in the opening moments of the game. Norfolk State (0-1) jumped out to an 8-0 lead in the first 90 seconds of the game. McCuin did not panic and call a timeout. Instead she opted to let her team figure things out on the court for themselves. From the 8:33 mark in the first quarter to the 5-minute mark in the second quarter, the Rebels went on to outscore the Spartans 22-5.

With a new-look roster that is still trying to gel, it was a confidence boost.

“Honestly, it felt pretty good,” Ole Miss guard Crystal Allen said. “Most times when you watch basketball games and (teams) jump out to a start like that a coach is like ‘ok, what’s going on?’ To know that we were on the floor and to know that she had confidence in us to get a stop, that just gave us way more confidence.”

After the end of the third quarter the Rebels held a 48-39 lead. The final 10 minutes was a low-scoring affair but they outscored Norfolk State 12-3 to finish with the comfortable margin.

“I just told them ‘guys, it’s 10 minutes. Do you want to win the game or not?’” McCuin said. “’Are you telling me you going to let 10 minutes stop us from having success?’”

Ole Miss will continue the season-opening home stand to host IUPUI on Friday at 7 p.m.