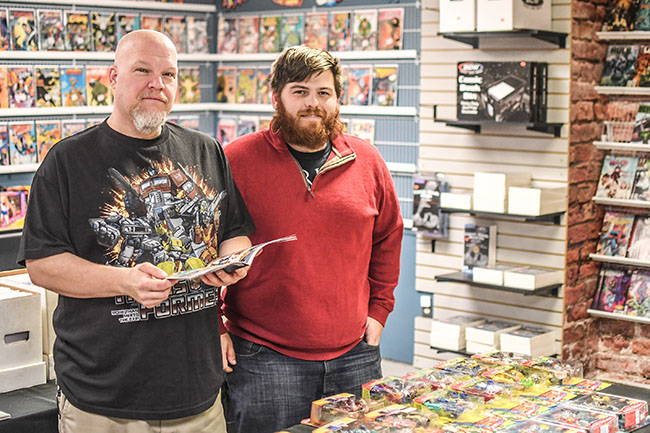 Kent Eddy, left, and Drew Glasgow are the owners of Bad Eddy's, a comic book and gaming store on Jackson Avenue, in Oxford, Miss. on Friday, November 2, 2018. (Bruce Newman)

Bad Eddy’s Hobbies and Collectibles carries plenty of merchandise. But it’s not exactly a store.

“We consider this the community’s space,” said Drew Glasgow, who co-owns the store with Kent Eddy. “We tell everyone to make themselves at home.”

That philosophy is elemental to Bad Eddy’s business model — and it distinguishes the new business from most of its kind. For example, in the comic book section, overflowing with collectibles and new releases every Wednesday, Bad Eddy’s has installed benches to invite customers to browse before they buy. In most places, Kent explains, an employee will rush over to admonish potential customers the second they begin to flip through a comic book.

“We want people to be able to explore and see if they’ll like something before they buy it. Chances are, they’ll find something they’re into, and then they’ve become a customer,”Glasgow said.

More than one-time customers, Bad Eddy’s seeks to provide an all-in-one gathering space for gaming, esports, collecting, model-building, anime, and manga. The store hosts regular gaming tournaments and shares the schedule for upcoming events on their Facebook and Instagram pages. Their first Pokémon tournament, just days after the store opened on Oct. 22, drew players from Mobile, Huntsville, Memphis and even St. Louis.

Kent is already planning workshops for model-building and other hobbies, as well.

Bad Eddy’s Members, who must be 18 or older, have the opportunity to take full advantage of such events and classes. Along with a 10 percent discount on all new merchandise, members gain 24-hour key fob entry to the game room, where they may use the store’s equipment or store their own. They can also rent space to build models; the store provides members all necessary supplies, except paints and brushes. Bad Eddy’s has fourteen surveillance cameras to protect against theft and ensure all members’ safety while the store is closed. Members also take priority when it comes to preordering comics, figurines and cards.

Even in major cities, most consumers have to visit multiple stores to find the variety of hobbies and collectibles Bad Eddy’s offers, and many still don’t have community spaces where gamers can gather face-to-face. “There’s nothing like this within 1000 miles of here,” Eddy said. “Certainly not in Mississippi, or even the South.”

Offering such diverse merchandise and providing gaming and model-building space has less to do with convenience than with bringing Oxonians with “any nerd bone in their body” together under one roof.

“We’ve had people in here playing Dungeons and Dragons while another group is playing Magic: The Gathering, and the next thing you know, they’re meeting each other and learning how to play something new. Chances are, if you’re into one hobby here, you’ll be drawn to others as well,” Glasgow said. “That’s the whole point.”

Eddy said that gaming has long been accused of isolating its fans, but that doesn’t have to be the case.

“The generation before us — they worried about gaming and its effect on community,” Glasgow said. “Now we’re that generation, and we’re doing it our way.”