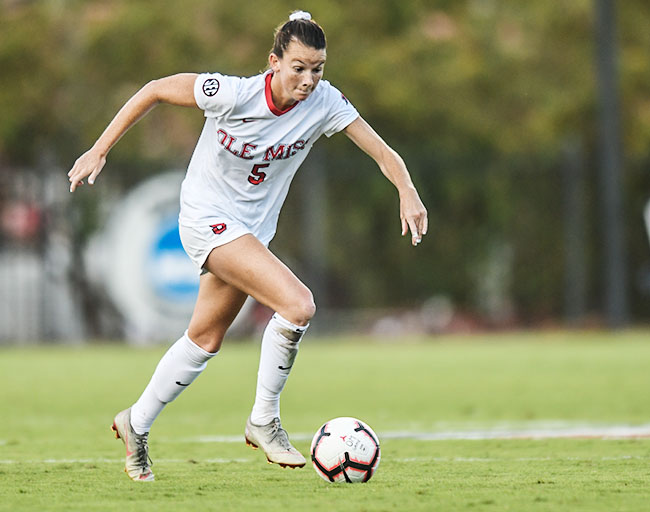 OXFORD – For the third time in four years, the Ole Miss women’s soccer team is headed to the NCAA tournament, capping one of the best runs in the history of the Ole Miss program.

“I’m really proud of (the seniors). That’s as good as anyone’s ever done here at Ole Miss… it really speaks to the quality and how they’ve been able to lead us,” said head coach Matt Mott. “It’s really an impressive accomplishment to make one NCAA tournament, but to make three out of four is just awesome.”

Ole Miss (12-7-1) will travel to Clemson (12-8) for a 5 p.m. Central time first round matchup on Saturday. For the senior class, every game is possibly their last in a Rebel uniform.

“We really have nothing to lose,” said senior defender Mary Kate Smith. “For the seniors it’s great motivation to not hold back at all and really encourage this group. It could potentially be the last time we play together, and we don’t want that.”

Smith is one of three seniors in the typical Rebel starting lineup, a group led by senior midfielder CeCe Kizer. A four-year starter, Kizer became Ole Miss’ all-time leading scorer in September. In her final year, Kizer not only leads the Rebels in goals (13) and assists (8), she leads the entire Southeastern Conference in points (34).

The success of college sports can be defined by how you perform against your rivals. Through four seasons, the Rebel seniors have never lost to their in-state rival Mississippi State or to Auburn.

“It’s awesome always when you can beat your rivals. It’s especially important to me since I’m from Mississippi,” Smith said.

Recent NCAA tournament trips for Ole Miss have been up-and-down. In 2015, the team made it to the round of 16 before losing in penalties to Texas A&M. Last season, they lost in the first round to Florida State. However, confidence is high that this year will not be like the last.

“I think this team has a lot more energy going into the NCAA tournament. Last year we were young and inexperienced. A of girls didn’t really know what to expect,” Smith said. “I think this year we’re really hitting our potential now.”

For the senior class, the three tournament berths is not simply an accomplishment for themselves to enjoy, it’s a building block for the younger girls on the team and the future of Ole Miss soccer.