Lafayette opens 5A playoffs at Germantown 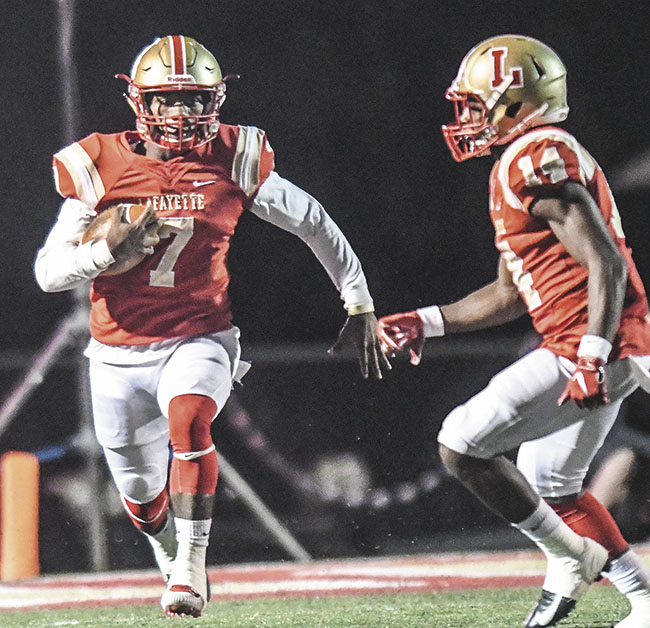 OXFORD — Each of Lafayette’s losses this season were viewed as a learning experience. The Commodores dropped three games in the regular season by a combined six points. The most recent defeats were followed by a victory, including last week’s win at Lake Cormorant in the season finale.

The learning experiences will have to stop at their 24-21 loss to Olive Branch two weeks ago if the Commodores want to keep their season alive and find themselves playing for a second state championship in three years next month.

The Mavericks (7-4) emerged out of Region 2-5A as the No. 2 seed due to their only blemish in region play coming against Holmes County Central who finished a perfect 7-0 in 2-5A.

Their success is attributed to a balanced offensive attack from sophomores Colton Gardner and Nick Barnes. Gardner is the Mavericks’ quarterback and has thrown for 1,095 yards but has a touchdown to interception ratio of 9 to 6. Barnes has carried the workload on the ground, rushing for 1,251 yards and 14 touchdowns.

Freshman Branson Robinson is right behind Barnes with 12 rushing touchdown but has ran for just over 800 yards on 112 carries.

“They’ve got a quarterback that is very accurate. Really smart, does not make bad decisions,” Fair said. “They’ve got two running backs that are really talented and a really big, strong offensive line. Germantown is a team that does not do anything to beat themselves. Turnovers, field position, all those little things that we’ve been preaching all year and everything like that are magnified in the playoffs. Because now, you give up a short field in the playoffs it could really be the possession that puts you out.”

Friday’s game is a historic one for Lafayette, who is playing in their fist Class 5A playoff game in program history. That is not much of a discussion topic for Fair, his staff or his players. To them it is another game that must be played and another team that is standing in their way of achieving their goal.

“Never comes up,” Fair said. “We haven’t talked about it. You get in this kind of grind where it’s day-to-day-to-day you never really have time to think about that. When the season’s over we’ll look back and hopefully say we had a good run in 5A. Until it’s over or until that last game is finished it’s not a concern of ours. We’re just trying to win the next one.”