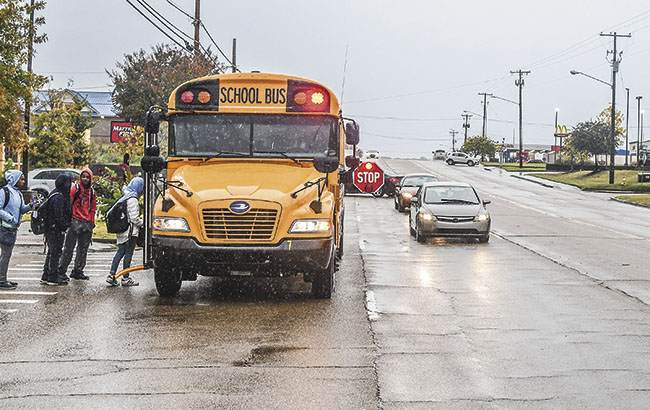 According to a local school district official, Oxford residents have continuously ignored school bus laws, which has compelled the Oxford School District to think of ways to increase awareness and keep school children out of danger.

According to Oxford School District Director of Operations Doug Cromwell, there were 32 instances in of October where drivers have gone around stopped school busses while they dropped off or picked up school children. In response to those instances, Cromwell said the school district is considering extending the bus arm with the stop sign attached to it, as well as launching a campaign to increase awareness about the existing bus safety laws and dangers of driving around a stopped bus.

The laws were brought to the forefront after a Nov. 1 incident where a 9-year-old Baldwyn boy was struck and killed while crossing a highway to board his school bus, by a driver who illegally drove around the stopped bus.

Cromwell said of the 32 instances where drivers drove around stopped busses in Oxford, some of them happened near the highway while others occurred on local streets.

“Bottom line is, when you see the flashers on and the arm out, you need to stop,” Cromwell said.

According to the National Highway Traffic Safety Administration, there were 1,300 deaths in school transportation-related crashes from 2007 to 2016.

“These preventable fatalities and injuries should serve as an urgent call for our elected officials to improve the safety of our most precious commuters,” President of Advocates for Highway and Auto Safety Cathy Chase said in a statement.

There are already multiple bus safety laws in place in Mississippi. Nathan’s Law, named after Nathan Key, a 5-year-old boy who was struck and killed getting off his bus in 2009, took effect on July 1, 2011 and implemented stiff penalties – a fine of up to $750 for a first a offense, and up to $1,500 and a suspended license for 90 days for a second offense – for drivers who pass stopped school busses.

In 2016, Mississippi Senators and House of Representatives passed House Bill 110, which built on those stiff penalties, requiring that a driver must stop up to 10 feet behind a stopped school bus or their second offense could also come with one year in prison instead of or along with the aforementioned fines.

Cromwell said the school district requires that bus drivers take two days of training before they are certified and allowed to drive. The Oxford School District is responsible training those bus drivers.

Cromwell also said drivers were required to report instances of driving around buses two years ago. Bus drivers can only note the where the drivers drove around a bus, and not a specific license plate, as that would be difficult to note in a short amount of time.

Josette Nelson, an Oxford native, said she witnessed three different instances where a car has sped around a school bus. Specifically, Nelson mentioned one instance in a residential area where she witnessed a pickup truck speed around a stopped bus going north on Molly Barr Road. She said a child was about to cross the street to get on the bus, and could have been hit had the pickup truck continued.

Nelson said she got the vehicle’s license plate, and reported it to the police. However, she said the police told her they could not act on the pickup truck, as police didn’t witness it in person.

“I don’t think that people know the rules,” Nelson said.

Nelson said she worries that the younger generation aren’t taught bus safety laws. That they either ignore the laws, or think they won’t be punished if they break them.