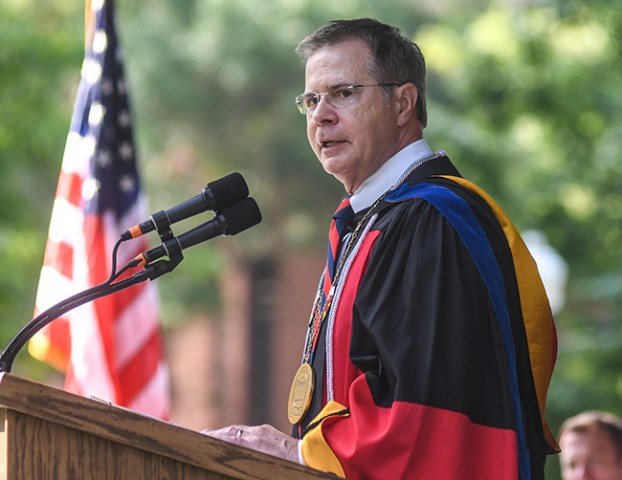 Chancellor Jeff Vitter speaks at the University of Mississippi graduation ceremony in the Grove in Oxford, Miss. on Saturday, May 12, 2018. (Bruce Newman, Oxford Eagle via AP)

Jeff Vitter will step down as chancellor at the University of Mississippi, effective Jan. 3, 2019.

The news was announced on Friday morning via a statement from the Mississippi Institutes of Higher Learning.

Vitter will transition to a faculty role at the University, serving as a Distinguished Professor in the School of Engineering’s Department of Computer and Information Science.

“It has been an extraordinary honor and privilege to serve as the leader of the University of Mississippi during a time of great progress and accomplishment,” Dr. Vitter said. “Being the flagship university is not just a designation, it is a responsibility — to transform lives, communities, and the world.  I am gratified that we have grown dramatically in impact, stature, and commitment in the past three years.  We are stronger academically, enjoy more support in private giving and research funding, and engage more proactively with the world around us. In addition, we are a more diverse community with a more visible dedication to inclusion and civility.

“There is no more important role on a university campus than as a faculty member,” Dr. Vitter said. “I am excited about the opportunity as a faculty member to advance the university’s research and academic excellence.  Both Sharon and I will remain strong citizens of Rebel Nation.”

The IHL Board thanked Vitter for his years of service to the University in their statement, with president Shane Hooper saying, “Dr. Vitter has made substantial contributions to the University of Mississippi during his three years as Chancellor. His leadership has moved the university forward in numerous ways and we are grateful for his service.”

Vitter was hired in October 2015 to replace Dan Jones when Jones’ contract was not renewed by the Mississippi Institutions of Higher Learning. At the time of Vitter’s hiring, he was given a four year contract which went into effect on Jan. 1, 2016 and was set to expire on June 30, 2020.

In May 2018, RebelGrove.com publisher Neal McCready tweeted that Vitter’s contract would not be renewed in 2020.

“Per two sources with knowledge of the situation, Ole Miss chancellor Dr. Jeffrey Vitter has been informed his contract with the university will not be renewed when it expires on June 30, 2020,” McCready’s tweet said.

Other news sources, including the Clarion-Ledger and HottyToddy.com, published stories reflecting McCready’s information but later deleted them. In response, the IHL released a statement to say that there was “no truth to the rumor.”

In a statement, Ole Miss Student Body President Elam Miller thanked Vitter for his service, and expressed his hope the student body would have a say in the process of selecting the next chancellor.

“As we begin the process of selecting a new chancellor, our greatest priority is ensuring that students have a voice in the decision,” Miller said in an email. “It is important to the student body that our next chancellor continues to carry our university forward. Students deserve to play a major role in this process moving forward and we hope to collaborate with the faculty, staff and the IHL to ensure the best candidate is ultimately chosen. It is with such cooperation that this next chapter will be reflective of the values and beliefs of the UM family as a whole.”

Before arriving at Ole Miss, Vitter served as provost and executive vice chancellor and as the Roy A. Roberts Distinguished Professor at the University of Kansas.

While at KU, he created the first-ever university-wide KU core curriculum; oversaw major facilities improvements and expansion and led the expansion of the schools of Engineering, Business and Pharmacy.

He served as the Frederick L. Hovde Dean of the College of Science and professor of computer science at Purdue University. He held a distinguished professorship at Duke University and served at Duke as chair of the Department of Computer Science. He had earlier progressed through the faculty ranks and in leadership roles at Brown University and also taught at Texas A&M.

His educational degrees include a Bachelor’s of Science with highest honors in mathematics in 1977 from the University of Notre Dame; a Ph.D. in computer science under Professor Donald Knuth in 1980 from Stanford University and an M.B.A. in 2002 from the Fuqua School of Business at Duke University.

His hometown is New Orleans, and he and his wife Sharon have three children.