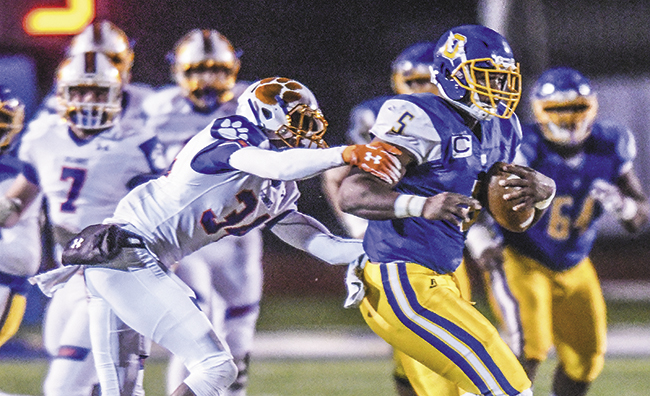 The Oxford Chargers (9-3) saw their season come to a finish in the first round of the MHSAA Class 6A playoffs. The Chargers lost to the Madison Central Jaguars (9-3) 35-3.

Madison Central moved the ball running the football on an Oxford defense that simply had no answers. The Jaguars ran for 290 yards on the night including 171 from quarterback Jimmy Holiday.

“Holiday is a really great athlete,” head coach Chris Cutcliffe said. “Jimmy is also a great decision maker and we didn’t tackle him very well, obviously he has something to do with that. We need to be better next time we see them down the road.”

Tonight marked the final game for the seniors of Oxford football. The Chargers will lose 13 seniors from this year’s team, but will bring back the majority of their core players for next season.

After moving into Class 6A last season, tonight marked the first playoff game for the Chargers in 6A. According to Cutcliffe, it’s a nice stepping stone but it isn’t the ultimate goal.

“It was definitely a goal for us but it wasn’t the end game,” Cutcliffe said. “A lot of credit goes to Madison Central and their coaching staff, they do a great job and they played a really great game.”
The Chargers were a team that faced a lot of adversity throughout the season. Their season began with a rainout in Vicksburg and a blowout loss to Starkville, but the Chargers responded and finished with a 9-3 record.

“I think we have a really close knit team,” Cutcliffe said. “That has helped us handle a lot of adversity whether it be injuries or being down in games and being able to come back and find a way to win. Unfortunately, we weren’t able to get the job done tonight.”

Offensively, Oxford moved the ball early in the first have with chunk plays from John Meagher and JJ Pegues, but the Chargers only finished with 225 yards of total offense on the night. According to Cutcliffe, self-inflicted mistakes were the Chargers undoing.

“I thought we shot ourselves in the foot a few times,” Cutcliffe said. “Penalties got us behind the chains and some things that we haven’t done of late that we couldn’t produce any points on. Unfortunately, we weren’t able to put points on the board early and dug ourselves a big hole.”

Water Valley topples Booneville to advance to 3A quarterfinals