Turnage jump starts Lafayette in first round win at Germantown 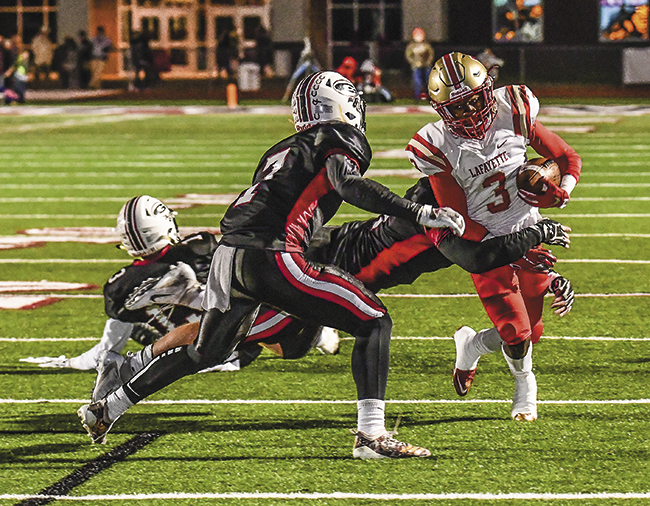 MADISON — Lafayette was in need of something to jolt them to life in the frigid cold. Brandon Turnage provided that spark with a 40-yard interception in the final seconds of the third quarter.

It helped the Commodores defeat Germantown 40-13 in the first round of the Class 5A playoffs at Germantown High School on Friday. It was the first 5A playoff win for Lafayette in program history.

Turnage’s pick-six was part of the Commodores’ 13 points scored in the final two minutes of the third quarter to break the game open. Jamie Shaw scored on a 21-yard run in response to the Mavericks finally getting on the scoreboard off a 38-yard run by running back Nick Barnes at the five minute mark of the third quarter. Barnes’ touchdown made it a 13-7 Lafayette lead at the time before the Commodores woke up.

“It took (Germantown) scoring and a big play by Brandon Turnage and I thought that just broke it wide open for us,” Lafayette head coach Michael Fair said. “In the playoffs you kind of want to put the ball in your playmaker’s hands and I really thought we did a good job of that tonight.”

Quarterback Randy Anderson scored two rushing touchdowns, as did running back Lance Stewart to go with Shaw and Turnage’s touchdowns.

Lafayette (9-3) had the chance to put the game away in the first half but a couple opportunities went by the wayside late. Two scoring chances inside Germantown’s red zone were not cashed in as Anderson sailed a pass on fourth down to turn it over. On the ensuing drive Quentin James picked off Germantown quarterback Colton Gardner’s pass and returned it inside the Mavericks’ 10-yard line. Once again as the clock expired Anderson’s pass to Turnage was caught just out of bounds in the end zone. The Commodores instead took a 13-0 lead into halftime.

“We got a little bit away from our game tonight, threw it a little more than we usually do but they were kind of giving us that,” Fair said. “We were making some mistakes that we got to clean up for next week. We get down to the red zone twice right before the half and don’t capitalize. (Germantown) is a good team and they fought at home. It was a big win on the road for us.”

Germantown (8-5) scored their second touchdown late in the fourth quarter.

With the win, Lafayette advances to the quarterfinal round and a rematch at West Point on Friday. The last time to two teams met at McAllister Field, the Green Wave escaped with a 14-13 win on Sept. 21.

Oxford’s season comes to a close in first round…