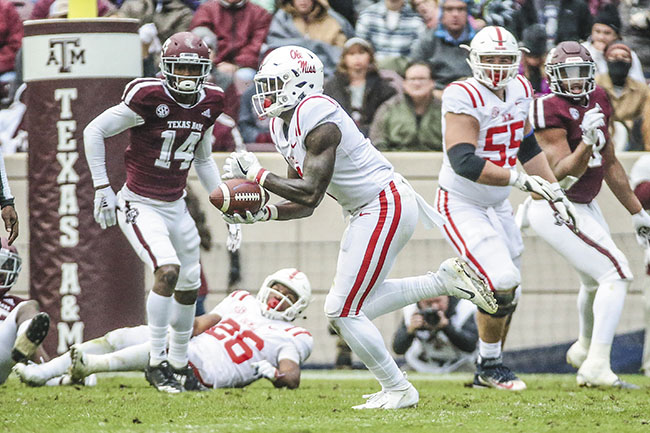 With his third quarter, 14-yard reception against Texas A&M, A.J. Brown has become the most accomplished wide receiver in the history of Ole Miss football.

The 6-foot-1 junior needed only 32 career games to break Shay Hodge’s career mark of 2,646 yards. Brown broke out last year as a sophomore, racking up 1,252 yards, breaking Laquon Treadwell’s single season receiving record. It took him only 10 games this season to pass the 1,000 mark.

Brown left the field briefly in the second quarter after a gain of 39 on what looked like a bit of a late hit out of bounds. Trainers said he fell awkwardly on his hand, but he would return after only missing a handful of plays.

Primarily a slot receiver for his tenure at Ole Miss, Brown moved outside a few weeks ago following the season ending injury to D.K. Metcalf, allowing true freshman Elijah Moore to step into a full-time slot role.

Brown’s ability to play multiple spots on the field and still produce has NFL scouts drooling. While only a junior, Brown will be eligible for April’s NFL draft if he decides his time as a Rebel is finished. According to CBSSports.com, Brown is the no. 6 overall prospect for the 2019 NFL Draft.

The yards record may have been the first to fall this year, but other Ole Miss career marks may be soon to follow. Brown needs only 27 receptions to break Treadwell’s record and four touchdowns to break Chris Collins’ touchdowns record.