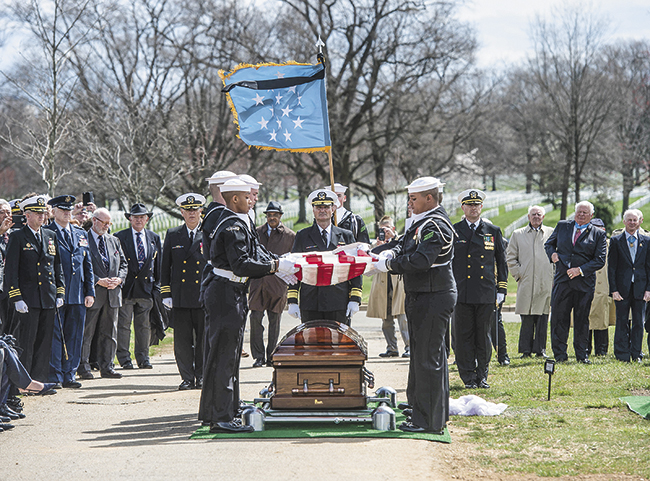 180404-N-UM082-0031 ARLINGTON NATIONAL CEMETARY (April 04, 2017) Sailors attached to the U.S. Navy Ceremonial Guard fold the national ensign at the funeral for Capt. Thomas J. Hudner Jr. at Arlington National Cemetery, April 4. Hudner was awarded the Medal of Honor for his actions in trying to save the life of his wingman during the Battle of Chosin Reservoir during the Korean War.  (U.S. Navy photo by Mass Communication Specialist 3rd Class Raymond Minami)

As the Oxford community observes Veteran’s Day weekend, Oxford native Terry Johnson gets to reflect on one of the most eventful years of his life in 2018.

Johnson, a Naval Seaman and Oxford High School graduate, was hand picked to be one of the 200 members of the U.S. Navy Ceremonial Guard, the official honor guard of the Navy.

While his superiors were looking for well-spoken service members to send to Washington D.C. to be a part of the Guard, Johnson, at the time, was undesignated and didn’t have a specific job.

Johnson hopped on a plane and headed for D.C., but that was the easy part; training to be a member of the Ceremonial Guard is a grueling process.

Ceremonial Guard recruits are required to stand absolutely still for long periods at a time and have spotless uniforms, which prepares them for making appearances at presidential, public and military ceremonies all over the nation.

Johnson said there were multiple times where he had his uniform picked apart for some of the most miniscule details. But, he could only sit there and take it. Such was the Ceremonial Guard’s training process; everything had to be absolutely perfect.

But Johnson drew from his Oxford roots to get him through the training. Those roots include the lesson “Keep my nose clean, and I’ll go far in life,” which taught Johnson how to maintain himself and choose his friends.

Johnson took his training so seriously, he made the personal choice of not leaving base until he passed his inspections.

“I wanted to cry,” Johnson said when he finally passed training. “It was the highlight of my year … I called my family.”

After graduating in 2017, Johnson became an official member of the Ceremonial Guard, where he endured some of the most emotional moments of being in the military.

Johnson’s duties include carrying remains of fallen soldiers off of AC-130 airships as they were brought home to be laid to rest, no matter the time of day.

Johnson said he remembers the screams of the families of soldiers as he carried their remains off of the planes at 11:30 at night, or when he had to stand at active funerals for hours listening to families grieve.

The Ceremonial Guard also carried the casket of John McCain during his funeral, which Johnson said was something he’ll remember for the rest of his life.

Johnson met McCain twice prior to his death and hails him as a “true American hero,” and the embodiment of hope and the military.

Once his two-year term in the Ceremonial Guard is up, Johnson said he could find a way to extend his time in the Guard, but he ultimately wants to rejoin the Navy.

“I love this place, but I want to be a Naval Officer,” he said, saying he wants to train recruits and give back, much like his officers trained him.