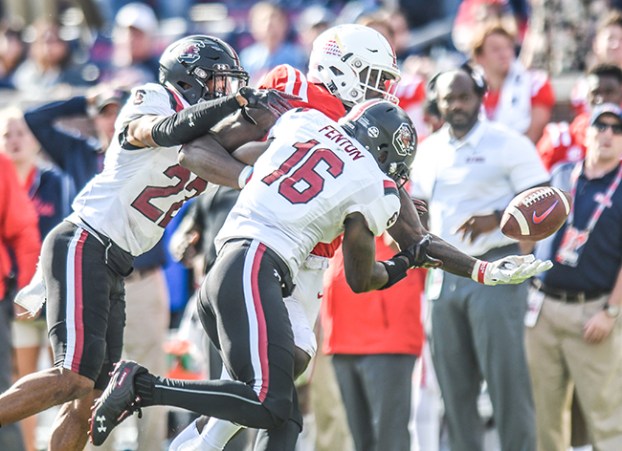 OXFORD – With nine days left in the Ole Miss football season, the message from head coach Matt Luke is clear. The Rebels need to find ways to finish in the fourth quarter, starting with third down success on both sides of the ball.

“The biggest thing is to win third downs. We must get better on defense and situational football,” said defensive coordinator Wesley McGriff. “In order to reduce the number of snaps on defense, we must win third downs.”

Saturday against Texas A&M, Ole Miss allowed the Aggies to convert on seven of twelve third down attempts. During their current three game losing streak, Ole Miss has allowed a 50-percent conversion rate on third downs. Those three teams – Texas A&M, South Carolina and Auburn – are converting only 39.1-percent of their third downs on the season. Ole Miss’ defense is consistently underperforming national averages on third down.

One thing the Rebels have struggled with, particularly on third down situations, is getting pressure on the opposing quarterback. Third-and-long situations are supposed to be times when generating a pass rush is easier, as you don’t have to worry as much about the threat of a run. But pressure from the edges has been lacking for Ole Miss. McGriff took some responsibility for lack of exterior pressure, but also laid part of the blame on defenders freelancing.

“Maybe I can call a little more outside pressure,” McGriff said. “Sometimes our players get so overzealous in terms of making plays that sometimes they abandon their area to go make a play. We just have to remind them to make their play.”

To be fair, Ole Miss has struggled with injuries all season, particularly on the defensive side of the football. Regardless, bad injury luck leads itself to little defensive depth. In order for the defense to stay fresher for longer, they need to be able to get off the field with more efficiency on third downs.

Offensively, the Rebel team that ranks 5th in the nation in yards-per-game is converting on only 38.2-percent of their third downs, 79th in the nation. Saturday against Texas A&M, they converted on only one of eleven third down attempts.

“We need to do a better job on third down, and that’s my job,” said offensive coordinator Phil Longo. “Some of the stuff that we did from an Xs and Os, game-plan standpoint we really liked, but we have to do it better.”

Failed third down attempts not only stall drives, but it puts a tired and stressed defense back on the field – a defense that is struggling to get off of the field on third downs in its own right. The coaching staff loves the fight and energy the team has shown in losses, but believes they simply need to put the pieces together on third downs, particularly late in games.

“The object of the game is to win, and that’s what those guys want. They’re coming up short and they’re frustrated,” Luke said on Monday. “But we have ten days left to pour into it and find a way to get that win in the 4th quarter.”

The next nine days are busy ones for the Rebels. They travel to Nashville for a Saturday night showdown with Vanderbilt before facing a short week. Some coaches will fly back early from Nashville to get a head start on preparing for the Mississippi State game. An Egg Bowl game awaits on the night of Thanksgiving, just five days after the Vanderbilt game.