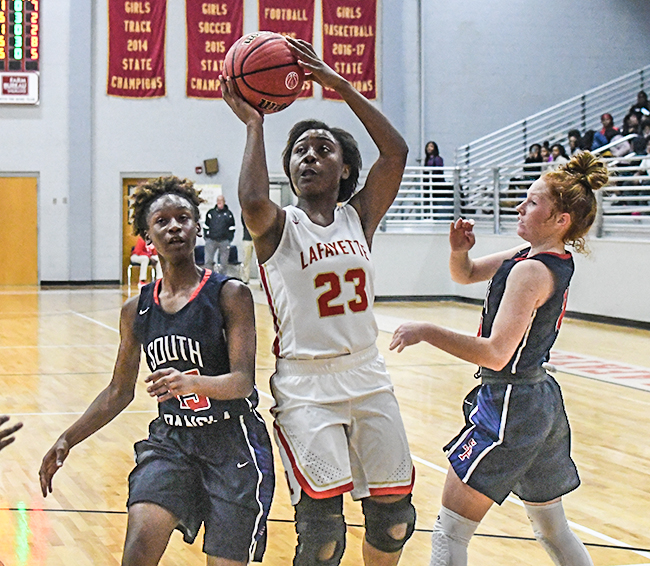 OXFORD — The first two weeks have been successful for the Lafayette girls’ basketball team, but even the best have off nights in a long season. Tuesday was one of those nights where the Lady Commodores had to find a way to win without their best effort. They did with a win 52-47 win over South Panola in their home opener.

A second half effort by Azariah Buford moved the Lady ‘Dores to 5-0 on the season. The junior scored 22 points to lead all scorers with nine of those coming in the final two quarters.

“We’ve got to do better, we’ve got to play smarter,” Lafayette girls head coach Shayne Linzy said. “We made bad decisions at bad times. For a little while we thought the clock was our enemy and we’ve got to be better than that. …With all that said we were able to find a way to win. That’s one of the neat things about this group I’ve got. They’re going to battle. It’s just getting them to understand that if we stick to what we do best and do it the right way, we might not have to have as many battles”

Lafayette led wire-to-wire but an erratic first half kept South Panola in the game when the Lady Commodores had chances to put the game away early. Buford and Holland combined for 21 of Lafayette’s 27 first-half points.

In the third quarter, the Lady Tigers surged to outscore Lafayette 15-7 and cut the Lady Commodores’ lead down to six points. It was all offense in the fourth quarter with South Panola outscoring Lafayette once again, but the Lady ‘Dores did enough to avoid their first blemish of the season.

South Panola’s Marshala Doyle had a team-high 19 points, scoring 15 of those in the second half.

“We hold (Doyle) to four points in the first half and we play the same defense on her in the second half and she gets loose,” Linzy said. “That’s a credit to South Panola for finding ways to get her the ball a little more. She worked to get the ball and she made us pay when she got it.”

There was another potential injury scare for Linzy in the second half. Kimaya Dixon fell hard going for a rebound and appeared to injure her ankle. Dixon is going to have more tests done this week to determine the severity of the injury and the length of time she’ll be out. With Xhiir Burgess already lost for the season due to an ACL injury, the Commodores do not need to lose another starter in the first month.

Lafayette is four games into the Brad Gray era and while the results are not there yet, the team has a different look to it on the court. The Commodores are competing, but on Tuesday they fell short in a 59-51 loss to South Panola in overtime.

The Commodores (1-3) had chances to win their second game of the season but three missed layups in the final seconds of regulation was a missed opportunity the Tigers jumped on in the extra time.

Tuesday’s game was the Commodores’ fourth in six days. They started the season last Thursday with three games in three nights in the West Union Round Robin tournament. Lafayette travels to Houston tonight before getting the weekend off before they play in next week’s Charger Challenge during the Thanksgiving break.

Despite playoff exit Oxford views second year in 6A…