Ole Miss bounces back with second straight win over Temple 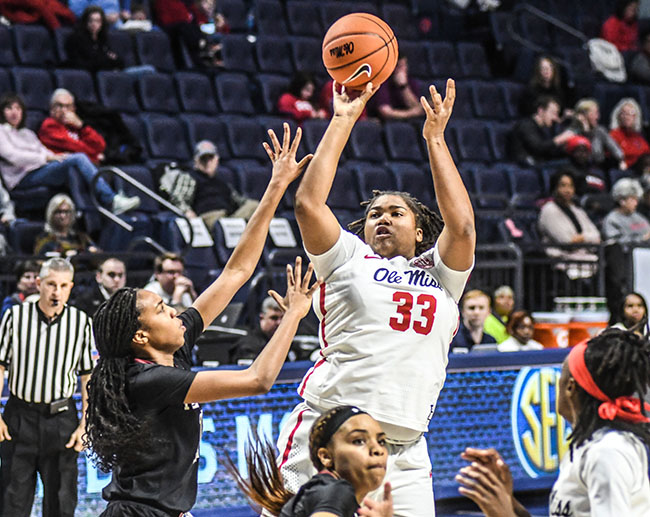 OXFORD — The process of rebuilding a program means there will be setbacks along the way. Last Friday was one of those setbacks when Ole Miss suffered their first loss of the season to IUPUI.

The result did not bother Yolette McPhee-McCuin. The first-year coach wants her team to have those losses in order to understand what it will take to improve.

“Nothing stings and burns until you touch the hot stove,” McCuin said. “That’s the thing about this team, as we grow and learn we’re going to have to figure out ways to have success or learn from our failures so we can move forward.”

Wednesday night was about success with the Rebels 62-55 win over Temple at the Pavilion to get themselves back in the win column. It was the second time in as many years Ole Miss has defeated Temple and they have won three of the last four meetings.

A quick start by the Rebels (2-1) was counted by a Temple rally in the second half. Each time Ole Miss had an answer.

“When we go out as a team we look at each game as just a one time opportunity,” McCuin said. “That’s what makes March Madness so fun. So, when you have a brand new team as this is only our third game together. You have to figure out ways to get them to lock in and fight and focus on the game plan. As a unit we’ve just looked at each opportunity as a March Madness game.”

The Rebels outscored Temple (2-1) 21-8 in the first 10 minutes and used 10 points in the second quarter to take a 31-22 lead into halftime. A third quarter surge by Temple had the game tied at 38-all in the final minutes, but the Rebels had a 7-2 run to close out the quarter. When Temple got to within three points midway through the fourth quarter, the Rebels once again responded with a 9-3 run.

“We jumped on them early but because we’re not used to winning we don’t know how to put four quarters together,” McCuin said. “I knew that (Temple) was going to make a run. What we did, I just got the girls to relax and understand that we had to finish the game and here’s how. I think that’s the coach’s responsibility when you have a new team like we are. As coaches we said we’re just going to have to get our team through this.”

Crystal Allen led the Rebels with 16 points and La’Karis Salter had her best game as a Rebel with 14 points and 5 rebounds. CeCe Muhate added 10 points.

There was a big boost to the Rebels’ roster earlier in the day when Gabby Crawford was declared eligible to play. Crawford has original signed with Alabama but then decided to transfer out earlier this semester and was ruled ineligible.

That ruling changed on Wednesday and the freshman forward provided 15 minutes off the bench, scoring 6 points and pulling down 3 rebounds.

“I don’t know if there’s a word for how big it was to have Gabby,” McCuin said. “What’s so impressive about what Gabby did was she found out two hours before the game that she was going to play. The whole week she didn’t even practice with us, she was on scout team. For her to come and show the composure and the fight, I’m so pleased and happy for her.”

The Rebels will conclude their season-opening four-game home stand on Sunday with Western Michigan at 2 p.m.