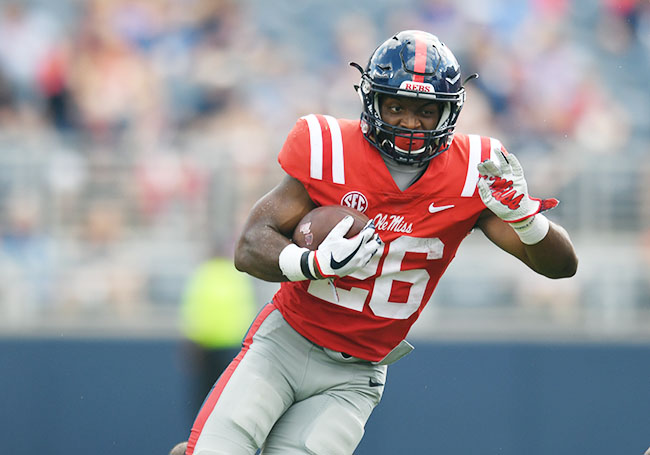 OXFORD – With bell-cow running back Scottie Philips likely sidelined Saturday against Vanderbilt with an ankle injury, Ole Miss will be turning to true freshman Isaiah Woullard to replace him.

Phillips, who ranks third in the SEC with 927 rush yards and first in touchdowns with 12, is officially questionable for Saturday. He did not practice Tuesday, but he has not been ruled in or out against Vanderbilt. Regardless, the Rebel coaching staff is preparing as if Phillips will not be available.

Isaiah Woullard had been playing in small amounts all season, spelling Scottie Phillips for rest and in specific packages. However, before Philips’ injury against Texas A&M, Woullard had never seen more than seven carries in a game.

When Phillips left early in the first quarter Saturday, Woullard saw the bulk of the work. He totaled 16 carries for 64 yards, a solid outing against the nation’s second ranked run defense. Woullard also caught one ball for ten yards.

“I’m really confident,” Woullard said, talking about being able to compile yards against such a tough Texas A&M run defense. “I just believe in this team and the offensive line. We’ll be ready.”

Running backs coach Derrick Nix said that the offense doesn’t change at all with Woullard in the backfield. Woullard will get the majority of the work against Vanderbilt, but will be spelled in spurts by juniors Eric Swinney and Armani Linton. Linton, who has been playing defensive back, was moved back to running back in wake of depth concerns.

Despite limited live action on the season, the Ole Miss coaching staff is confident in the freshman.

“Isaiah’s really been doing it all year, just hadn’t done it in a manner of having that many reps and that much of an opportunity,” Nix said. “He’s shown it every day in practice and I think just preparation met opportunity for him on Saturday, and he handled it really well.”

Freshman running backs typically don’t see much playing time at major programs, in part due to pass protection issues. College schemes and blitz packages are often much more complex than what they see in high school. However, Nix said Woullard having been playing all season has given him enough experience; they aren’t worried about Woullard’s ability to protect.

Isaiah Woullard is a legacy player for the Rebels – his father, Jerry Woullard, played running back for Ole Miss in the 1970s. If Phillips is unable to go against Vanderbilt, Saturday night will be Woullard’s first start as a Rebel.