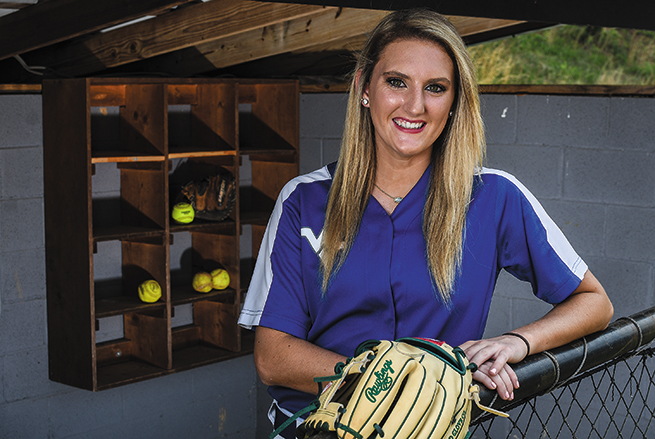 Water Valley's Anna Mills Avant, in Water Valley, Miss. on Monday, May 21, 2018, has signed to play softball at Southeastern Louisiana.

There was a landmark moment for the Water Valley softball program on Wednesday. For the first time in many years the Blue Devils had a player sign with a Division I program.

Senior Anna Mills Avant will continue her career at Southeastern Louisiana in a decision that was made way before Wednesday.

The Lady Lions approached Avant ahead of her sophomore season and soon after when head coach Rick Fremin offered, Avant accepted.

“I had a couple offers but I got offered from Southeastern Louisiana and went on a visit. That was my favorite, it was the one that I really loved,” Avant said. “I loved all of it. (coach Fremin) was probably what sold me. He’s a great guy and really genuine. He’s really big in his faith and that’s not something that you see often in college sports.”

Avant is the reigning EAGLE Player of the Year for softball after a very successful 2018 season. She led the Lady Devils with a .448 batting average with 28 RBIs and scored 29 runs.

In the pitching circle Avant also dominated. She worked 46 1/3 innings for a 4-6 record while striking out 34 and had an earned run average of 4.08.

“When coach Fremin offered me he’d never seen me play defense,” Avant said. “He had just seen my swing and I think that’s what he really liked. He told me I wasn’t the biggest player but I had a really big swing”

There is still one more season left for Avant at Water Valley. Softball will begin in February and will be her final year with head coach Allison McCain. McCain is entering her third season as the Blue Devils’ head coach and is one person Avant attributes to getting her game to where it would be noticed at the Division I level.

“Coach McCain bas really helped me with (my swing),” Avant said. “We hit every single day in practice and always working on that. …Having the pressure off, knowing I have signed and I already know where I’m going is really cool. So, this year I can just have fun and finish off my last year.”