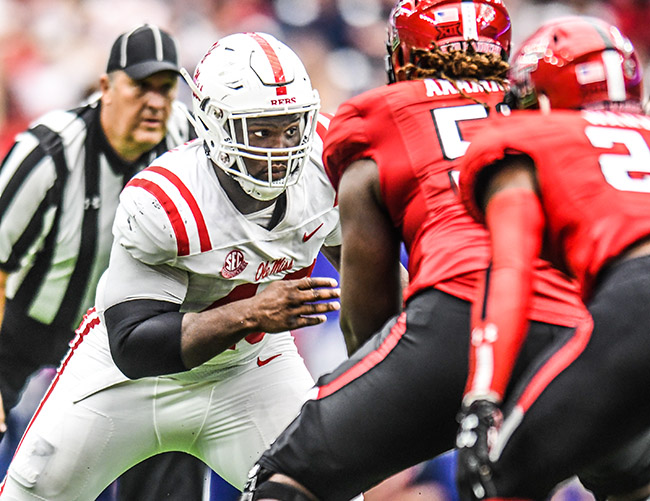 Ole Miss defensive tackle Josiah Coatney (40), plays against Texas Tech at NRG Stadium in Houston, Texas on Saturday, September 1, 2018. Coatney said, “If you want to be a really good defense, if you want to be on an elite level, you have to be able to communicate.” (Bruce Newman, Oxford Eagle via AP)

OXFORD – Saturday in Nashville will not only be the last road test of the year for the Rebels, it will be an opportunity to sure up an issue that has been plaguing the Ole Miss defense for most of SEC play: defensive communication.

Watching Vanderbilt, one very noticeable aspect of their offense is the number of pre-snap motions and shifts the offense uses. This helps senior quarterback Kyle Shurmur, son of New York Giants head coach Pat Shurmur, diagnose man vs. zone looks and isolate matchups the offense likes. It also does a good job of creating defensive confusion.

“It’s just about being focused, about having your eyes are right, knowing where your help is,” said head coach Matt Luke. “There will be a lot of window dressing that can try to take your attention, but as long as you stay focused on your job, you’ll be fine.”

For the defensive front, communication has been a point of contention all season. These pre-snap shifts not only create confusion, it raises matchup issues that players are going to need to make sure are clearly communicated in a very short period of time.

“Even if you feel like everyone has the call, repeat it. I feel like sometimes, guys think (other) guys get the calls, and they don’t,” said junior defensive tackle Josiah Coatney. “If you want to be a really good defense, if you want to be on an elite level, you have to be able to communicate.”

In addition to how they dress up the run game, Vanderbilt has one of the best running backs in the conference. Ke’Shawn Vaughn is fourth in the SEC in rushing yards (849) and leads the league in yards per carry (7.5). He’s very good at finding gaps with bodies all around him and has breakaway speed when he hits the second level.

“You can tell he’s big and a physical back, but he runs away from people too,” Luke said. “You have to find a way to populate the ball, get more than one person there, because he does do a good job of making the first person miss.”

Ole Miss struggled last week when Texas A&M brought in a fullback and decided to run from under center. Going heavy is a wrinkle Derek Mason has not been shy about utilizing in his time at Vanderbilt. Given the Commodore’s aggressive running game, defending against heavy rushes is something the Rebel coaching staff is hoping to sure up.

“We better get ready for some heavy personnel groupings,” said defensive coordinator Wesley McGriff. “I’m sure they’ll dial it up because it wasn’t our strength this last ball game.”

Weather Saturday in Nashville will be a little more manageable than is has been the past few days in Oxford. The team practiced outside Tuesday but moved inside the Manning Center Wednesday. Saturday evening against Vanderbilt should hover in the high-40s and low-50s. Luke described it as “good football weather” for a lineman. The matchup will take place at 6:30 p.m. and can be found on SEC Network.