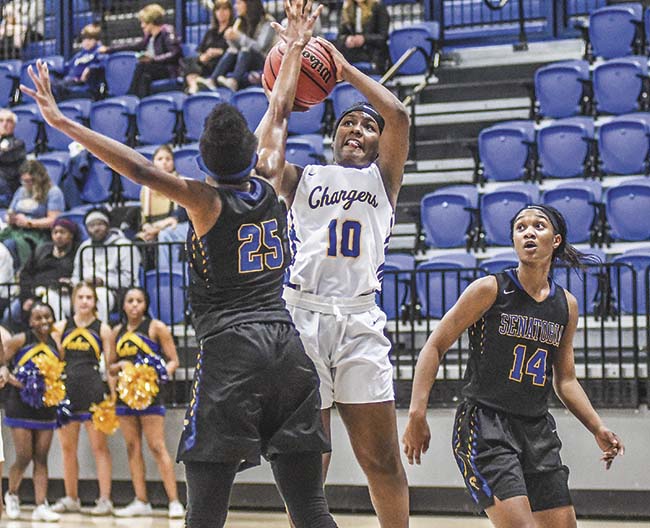 OXFORD — Drew Tyler labels his team this season as the ‘land of the youth’ but with each passing game the youth are growing up. Thursday’s game provided another chance gain experience in Oxford’s 55-43 win over Senatobia inside the OHS gym.

After lighting up the scoreboard by averaging 81 points in their first three games, the Chargers (4-0) had to find a way to grind out a win on a night when the shots would not fall.

“We had a vast number of empty trips on offense,” Tyler said. “Senatobia didn’t score it either and as a coach, and maybe as a spectator, you just kept waiting for ‘hey, their fixing to really come out of the game. Because off the opening tip I thought we were playing pretty good, sharing the ball, up tempo. Then all of a sudden it just led to a game with a lot of empty trips.”

The Chargers jumped out to a quick 11-2 lead before the Warriors (1-3) got it back to 15-10 at the end of the first eight minutes. It was a wire-to-wire win for the Chargers but they could never string together scoring possessions to put the game away when the opportunity presented itself.

Kylan Blackmon led the team with 12 points while Quan Jones added 11 and Tykel Owens chipped in 10. In his second game back since football season ended J.J. Pegues scored 4 points.

“(Jones) is a junior and he cleans things up and he keeps it simple,” Tyler said. “Less is more. He does not have to be flashy. He rebounds with both hands and takes strong dribbles and finishes. I’ve heard some of his teammates talk about how business-like he is. I kind of want that to be contagious and some of these other guys to catch what he’s got.”

First win of the season

After a tough start to the season through three games there was finally a reason to smile inside the Oxford girls’ locker room on Thursday.

With her layup going in with 17 seconds remaining, Kelsey Wilborn did what seniors are supposed to do and provided the Lady Chargers their first win of the season in a 45-43 victory over Senatobia.

During a timeout in the final minute of the third quarter, Oxford head coach Cliff Ormon told his team that was the moment in the game where they were going to have to decide if they wanted it more than Senatobia.

“This team has wanted to win and we’ve been close in every game we played and had opportunities to kind of make that shift in the game,” Ormon said. “Do we take control or let the other team. It was our time to step up because we had let the momentum kind of slip away and it was on us. I thought the response is what you want to see.”

The Lady Chargers (1-3) trailed by no more than three points at the end of each of the first three quarters. The game was theirs for the taking and in the final eight minutes Oxford took control.

Lewis’ play in the fourth quarter helped the Lady Chargers keep within reach and had one of her best games of the season.

“Having Nina step up, she’s a sophomore and played in a (junior varsity) game the other night and I told her when she played she stood out and that’s how get your varsity minutes,” Ormon said. “She had to go through some things to make sure she earned that playing time and we need her out there like that. She can be a spark off the bench because she hustles everywhere she goes.”