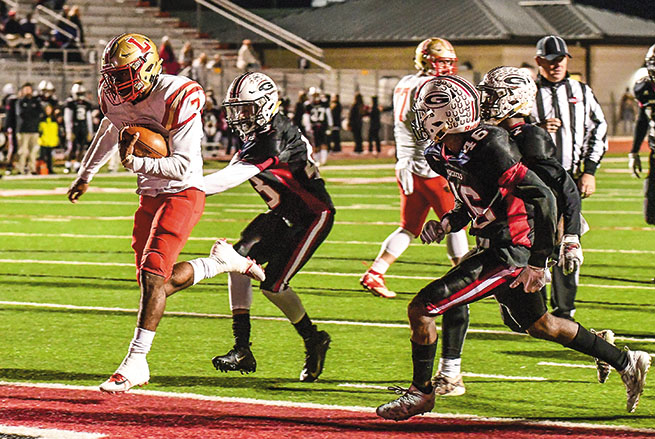 OXFORD — Very few times in life are second chances offered. Lafayette understands this very well and realizes the opportunity that lies in front of them.

The Commodores get another crack at West Point on Friday (7 pm., 105.1 FM) with a berth to the Class 5A North Half championship at stake. It is a game both teams assumed would happen, albeit on Black Friday and not the week earlier. Yet, the game is this week and the Commodores are itching to get another chance at dethroning the two-time defending Class 5A champions.

The winner will face the winner between Olive Branch and Holmes County Central in next week’s 5A semifinal round.

“When we left there a couple months ago we really wanted to play them again,” Lafayette head coach Michael Fair said. “It was such a great game and we didn’t feel like we played our best. Our kids are looking forward to it.”

Lafayette (9-3) must return to the field where they began Region 1-5A play nearly two months ago. The Commodores and West Point played what started as an offensive slugfest but quickly turned into a defensive battle and the Green Wave (11-1) escaped with a 14-13 victory on Sept. 21.

Since then the two teams have seemingly been on another collision course in the postseason and that takes place this week. After that loss in West Point the Commodores went on to win five of their last six games in the regular season, seemingly improving with each week. West Point seemingly never got worse, going a perfect 7-0 in region play to earn the No. 1 seed.

“Not much,” Fair said laughing when asked how much West Point has changed in the last two months. “They were good then and they were good now. One thing West Point does is they feel like they’ve got guys who do what they do well. They’re 40-2 in the last three years and that’s why. Because what they do they do better than anybody else. I don’t look for them to change a whole lot of what they’re doing just because they’re playing us again.”

There has not been a lot of stress and anxiety in the Lafayette locker room all season, a year removed from missing the postseason completely after winning the state title in 2016. Getting back to the playoffs and two wins away from another state championship appearance has not ratcheted up the pressure this week. On Wednesday, the Commodores started practice early to beat Mother Nature but the snow fell anyway. For most teams it would help lighten the mood and loosen the tension. On Lafayette’s practice field there was neither.

“This team’s not feeling any pressure right now,” Fair said. “Our kids are just ready to play. We know we’re underdogs again, going down and playing a great opponent with great tradition. Our guys just aren’t feeling any pressure. We’re having fun at practice and gotten better each day this week even with the weather conditions.”