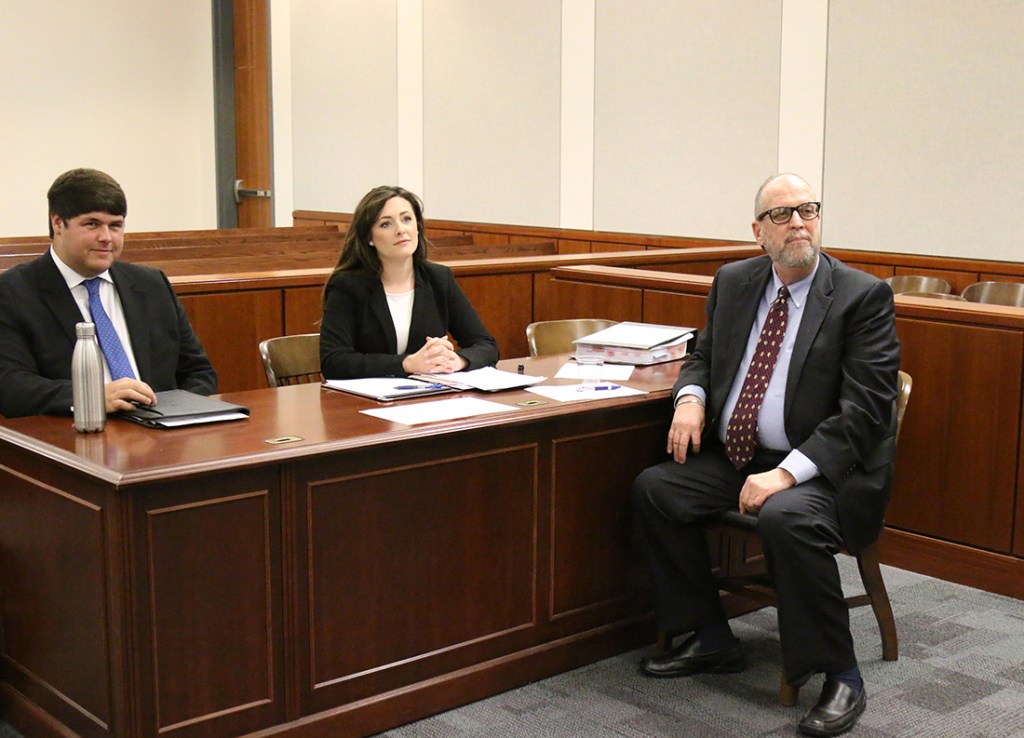 University of Mississippi law students Reid Posey, left, and Brittney Eakins work with professor Phillip Broadhead to practice their oral argument before delivering it to the Mississippi Court of Appeals. (Christina Steube)

When Reid Posey and Brittney Eakins received their case, the two third-year University of Mississippi law students had a very quick turnaround.

When the duo first heard of the case they would argue in front of the Mississippi Court of Appeals about three weeks ago, they spent the next eight days preparing non-stop.

Eakins and Posey practiced two hours a day, everyday, splitting the work into two sections – a 15-minute introduction and a 15-minute rebuttal – in order to present to the Court of Appeals on November 13 through UM’s Criminal Appeals Clinic.

Eakins and Posey’s case was the 35th the Criminal Appeals Clinic has given students since the program’s inception in 2002.

“We did it,” Eakins said. “It was a really proud moment for us.”

The result wasn’t just a successful argument. Director of the Criminal Appeals Clinic and UM professor of criminal law Phillip Broadhead said watching the argument Tuesday gave him a sense of pride.

“This may have been the finest presentation of an argument we’ve ever had,” Broadhead said. “It as obvious the court was listening very closely to what the students were saying.”

Eakins and Posey were arguing a case where a Harrison County judge ruled defendant’s case could proceed to trial after a nearly five-year delay, despite the defense claiming a Speedy Trial Act violation.

While both arguments were similar, Eakins, who prepared the rebuttal, had to anticipate what the counterargument would be, which was intimidating to do as they both were going against a barred Mississippi lawyer.

“It’s a constitutionally protected right,” Eakins said about the right to a speedy trial. “I think that what we’re seeing is there’s a growing issue, in our state in particular, in defendants who might be charged but wait in jail for long periods of time waiting for trial.”

The Criminal Appeals Clinic is one of 11 different clinics UM’s law program offers, and Eakins and Posey received their case because of what they’ve done throughout their time in the clinic.

“It’s probably a testament to the kind of work that you were exposed to going through the appeals clinic,” Posey said. “You get to work on these big issues.”

Broadhead highlighted that the Criminal Appeals Clinic has a revision rate of nearly 15 percent, which is higher than the state revision rate of around 5 to 6 percent. Of the 35 cases argued through the clinic, 18 have gotten reversals. That kind of success is exactly what he envisioned when the program began in 2002.

Along with having success in the courtroom, Broadhead said the real-life experience the clinic provides a student makes the transition to a professional lawyer much easier.

One of those experiences is the simply being present in a courtroom, which Broadhead says never changes.

“You never get the adrenaline out of your system,” he said.

“We’re in the Supreme Court building,” Posey said. “It was very imposing to walk into that courtroom.”

Another aspect of the proceedings, which made the appeal somewhat sentimental, was it was the final oral argument that Chief Judge L. Joseph Lee would hear. That caught Eakins and Posey by surprise. Broadhead called the moment bittersweet.

“This is the last time he’s going to have students from our school argue in his courtroom. That was a really powerful moment.”

While Posey is still undecided where he wants to take his law career, Eakins said Tuesday’s experience is making her reconsider her career path.

“I always envisioned myself as a prosecutor,” Eakins said. “For the first time ever, I’m strongly considering doing defense work. And I’m very proud of that.”