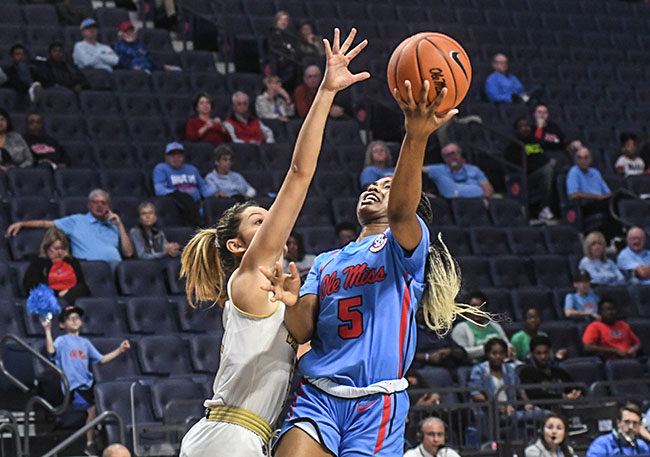 Ole Miss had to dig deep, but the Rebel women’s basketball team found the resilience to hold on and beat Western Michigan, 69-66, at he Pavilion at Ole Miss on Sunday.

The Rebels (3-1) had a smooth first half, jumping out to a 40-29 halftime lead, but the Broncos (1-3) lit up the scoreboard in the third quarter (21-9) to make it a game in the fourth. From there, the senior duo of Crystal Allen, who scored 19 points, and La’Karis Salter, with 13 points and 12 rebounds, took control, scoring a combined 16 points in the fourth quarter alone to help push Ole Miss over the edge.

“I’m just pleased that we found a way to win,” said Ole Miss head coach Yolett McPhee-McCuin. “There was just so much that could have gone wrong at the end of the game, and hats off to our young ladies for figuring it out and really hunkering down and getting the necessary stops that we needed to get in the win column today.”

It was that disappointing third quarter that helped spark the fourth-quarter heroics out of Allen and Salter, who were both held scoreless in the third frame. After WMU’s Maddie Watters  nailed a three pointer to open the quarter and extend the Broncos largest lead of the day at 53-49 with 9:21 to play, it was Salter who immediately took the game into her hands on the next possession with a jumper. Salter scored five in a row for Ole Miss before Allen knocked a three while falling backwards to give the Rebels the spark they needed to counter with an 8-0 run.

“I was excited about what I was hearing in the huddle,” McPhee-McCuin said. “Crystal was really fired up and really upset about the third quarter performance, and La’Karis was as well. These are two kids that came here with the intent to make the best out of their senior season, and when I heard the passion coming from them and the fact that everybody was locked in and didn’t get upset or anything like that shows that some leaders are emerging. That’s what we’re going to need this season.”

With the Rebels now up 57-53 with 7:18 to play, it was a mad dash to the finish. The Broncos were able to get within one a few times, including with just 11.8 seconds to play following a layup by Logan McCane, but Ole Miss took advantage of their free chances, converting 17-of-22 from the free throw line – including a 9-of-12 clip in the fourth quarter alone.

“I think they’re starting to enjoy what winning feels like,” McPhee-McCuin said. “They’re starting to understand what it takes to win. It’s a Division I game, so you have to come to play, no matter who the opponent is.”

For Allen, it’s her fourth double-digit game to begin her Ole Miss career following her 19-point outing. Additionally, she has scored at least 16 in each game as a Rebel. She currently stands at 900 career points after her two stops at Seattle and UT-Arlington before coming to Ole Miss this season, and her 18.0 points per game ranks sixth in the SEC as of right now.

For Salter, it’s the first career double-double for the Tallahassee, Florida, native at 13 points and 12 rebounds – the second by a Rebel this season after Jhileiya Dunlap’s in the season opener against Norfolk State.

Ole Miss got a strong performance out of starting point guard Mimi Reid as well, who had six points and five assists to go along with a career-high 11 rebounds. This is just the fourth game of action for the redshirt freshman, who missed all of last season due to injury. Reid’s efforts, combined with Salter’s 12 boards, marks the first time Ole Miss has had multiple people with double-digit rebounds since Jan. 1, 2017 against Arkansas.

Up next for Ole Miss is a Thanksgiving week trip to the U.S. Virgin Islands for the Paradise Jam. The Rebels will go up against No. 2 UConn on Nov. 22, Purdue on Nov. 23 and St. John’s on Nov. 24 before returning to host TCU for the SEC/Big 12 Challenge on SEC Network on Nov. 29.

“I’m really looking forward to the opportunity to spend time with everybody that’s a part of our program,” McPhee-McCuin said. “We got this job and we have been hitting the ground sprinting. We haven’t had time to spend with each other because everybody is out there trying to get it done for the program, and it’s the same with the girls.”

Red zone woes continue to plague the Rebels in…