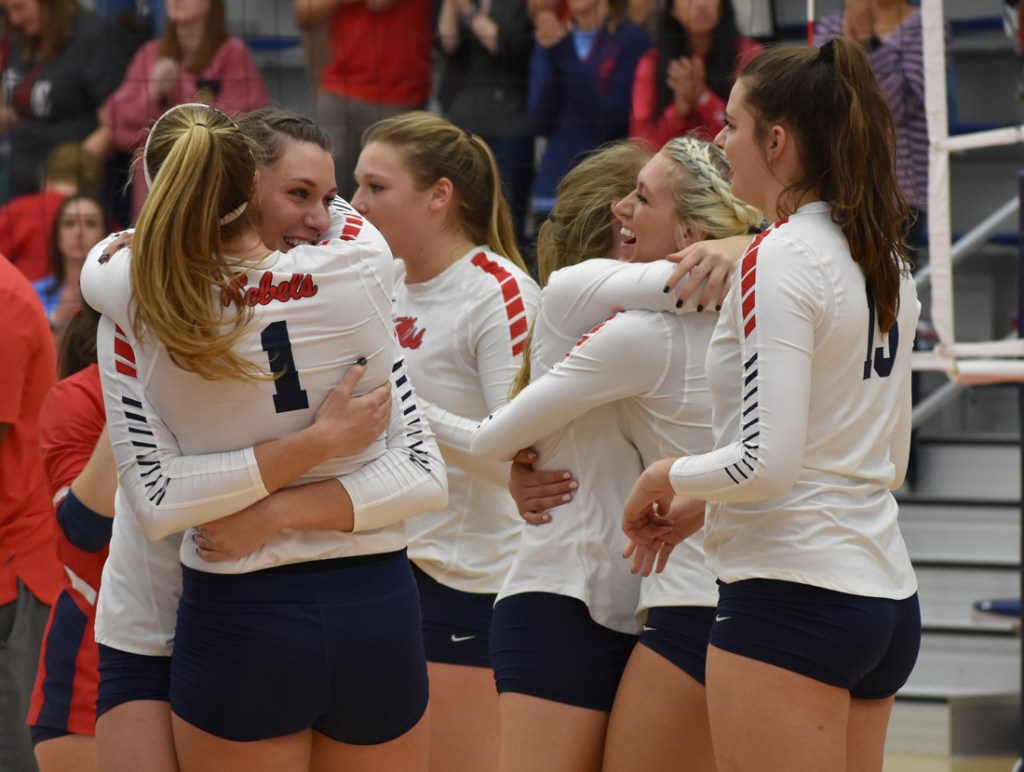 OXFORD – Gathered on Gillom Center’s court after beating Alabama 3-1, Ole Miss’ volleyball team watched on the video board as each non-senior member of the Rebels sent the seniors off with heartwarming words of thanks, encouragement and endearment.

An emotional Caroline Adams, one of the seniors, watched as her teammates said word after sentimental word, with coach Steven McRoberts reassuring Adams he’ll be there if she ever needed anything.

“I’m gonna miss it so much,” Adams said.

Adams helped lead the way for the Rebels, who rode the dynamic senior day emotions to a convincing win (25-18, 22-25, 25-16, 25-15) over the visiting Crimson Tide on Sunday. Those emotions ran so high post game that, for a moment, it didn’t matter that Ole Miss’ record (14-17, 4-13) fell below expectations after celebrating a National Invitational Volleyball Championship in 2017.

That’s because the Rebels sent their seniors off right. 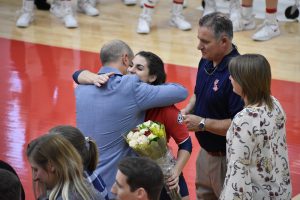 “It’s been a difficult season from a wins and losses standpoint,” McRoberts said. “But they came every day, worked really hard, had great attitudes.”

The Rebels took the first set, albeit falling behind 7-3 early on. Solid play around the net, propelled by two aces, got Ole Miss back in front 15-14, and a 10-3 run sealed the set win.

Ole Miss and Alabama seemingly traded places in the second set, as the Rebels committed eight errors to the Tide’s three, and Ole Miss lost the momentum they had established. In the first set, Ole Miss only had three errors to Alabama’s seven.

McRoberts said his team displayed key resilience as it recaptured its low-error performance from the first-set, and the Rebels dominated sets three and four. Junior Emily Stroup spiked eight kills in the third set, part of her double-double day with a team-high 24 kills and 16 digs, to spark a 13-3 Ole Miss run which won the third set. 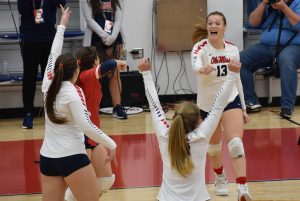 “It’s really good when everybody feels confident and everybody’s feels on,” senior Delaney Gallagher said. “I was so proud of all my teammates.”

In the final set, the Rebels got out to an 8-3 lead before winning 25-15. That score that was much closer than it appeared.

“We had a big lead at the beginning,” Adams, who finished with a team-high 20 digs, said. “It was just fun playing loose those last couple points.”

The Rebels’ win was also a reversal of where they’ve been the entire season, where they’ve lost five games that went to five sets after starting the year 10-4.

“We’ve been in a position to win a lot of games, we just haven’t finished,” McRoberts said. “Our record will not speak for how good this team is and that’s disappointing.”

After sealing the win, the Rebels reveled in their win with the crowd of 524 who came to pay homage to the seniors, setting, spiking and hitting with fans and family. McRoberts said the four seniors – Adams, Gallagher, Caitlin Wernentin and Audrey Fischer – played a part in shaping the team’s current culture, which included four-year players like Adams and transfers like Gallagher.

Galllagher, who transferred to Ole Miss from Middle Tennessee State, said prior teams she’s been on had their cliques of girls, where she was only friends with two or three of her teammates. She found the opposite when she transferred in 2017.

“I am best friends with every single one on this team,” Gallagher said. “I’m not ever upset about going to practice, because I get to hang out with my best friends.”

Adams, who has been the Rebels’ libero since 2016, had no doubts about her choice, either.

“I couldn’t ask for anything better,” Adams said. “If I had to do it all over again, I’d still pick Ole Miss.”