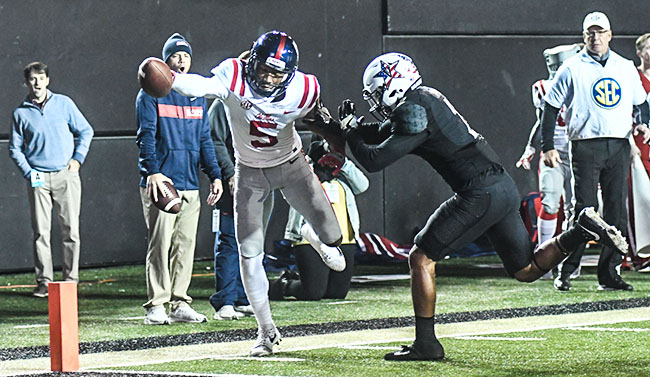 Ole Miss wide receiver DaMarkus Lodge (5) steps out of bounds at the one yard line as Vanderbilt Commodores defensive back Frank Coppet (2) defends in Nashville, Tenn. on Saturday, November 17, 2018. Ole Miss would settle for a field goal. (Bruce Newman, Oxford Eagle via AP)

NASHVILLE – Saturday’s 36-29 overtime loss to Vanderbilt, dropping Ole Miss to 5-6 on the season and 1-6 in SEC play, was a culmination of a plethora of different issues that have plagued the Rebels all season.

In a year of constant struggle for the Rebels, some things simply haven’t changed. Points of emphasis have seemingly never corrected themselves. Saturday in Nashville, a major issue for the Rebels was scoring touchdowns in the red zone, something they’ve struggled with consistently in SEC play.

“That’s the story of the game, in my mind. If any one of those field goals were a touchdown, we win the football game,” said Ole Miss head coach Matt Luke. “We just have to make plays when they’re there and score touchdowns in the red zone.”

In one sequence in the second quarter, DaMarkus Lodge appeared to have scored from 11-yards out on a screen. After review, he had stepped out at the one-yard line. Jason Pellerin dropped a pass on the next play, another play that looked like a touchdown until it went to replay. On third down, an Isaiah Woullard rush lost two yards. Unsurprisingly, the Rebels would settle for a field goal.

This is far from the first game of the year where the Rebels struggled converting yards into points. Ole Miss had 578 yards Saturday and scored just 29 points. In two recent losses to Texas A&M and Auburn, Ole Miss had over 440 yards in both but scored just 24 and 16 points, respectively.

All the red zone issues climaxed in overtime on a 3rd-and-6 play from the Vanderbilt eight-yard line. A pass from Jordan Ta’amu to A.J. Brown appeared to have tied the game, but was overturned upon review – a casualty of an oft-discussed and complicated catch rule. It appeared like Brown had gathered the ball, but was later ruled that he did not control the ball going to the ground. The Rebels would fail to convert on the ensuing 4th-and-6, ending the game.

“(I) really feel like I gained control of the ball. I had two feet down. Knee down. I thought I had control of it,” Brown said. “How much more control do you need?”

It’s not an issue the coaching staff is shy to talk about or one where they’re not putting in significant time to fix. Both Luke and Longo have been talking for weeks about red zone efficiency being a point of emphasis.

“Anytime we’re not having the success we want in a different area, we re-evaluate it. I thought our staff was confident in our plan this week. Obviously it just wasn’t enough,” Longo said.

Ole Miss has just one chance left on the season to correct these red zone issues, the Egg Bowl. The Rebels have a short week upcoming, culminating in a Thanksgiving night matchup against Mississippi State. They won’t be content without getting their second SEC win.

“We’re in the win business. When you don’t win the game, you’re not satisfied,” said defensive coordinator Wesley McGriff. “Our players are playing hard, they have the right attitude, but we need to in football games.”