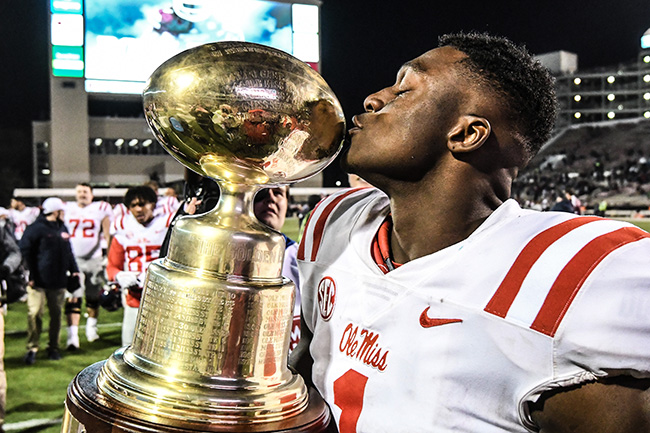 OXFORD – Egg Bowl week adds a little more. Players and coaches seem a little looser. They have a little more energy. It’s an exciting and meaningful short week for the Rebels. They might not be playing for bowl status, but they’re fighting for themselves, for the seniors, and for all the Mississippi natives and Ole Miss grads that make the Egg Bowl the spectacle it is.

“It’s huge for the people of Mississippi. It always has been. It’s a game that means so much to so many people,” said head coach Matt Luke. “It’s 365-day bragging rights. It’s always been important in my family ever since I can remember. This is not my second egg bowl, it’s my 42nd.”

Luke not only grew up in Gulfport, Mississippi, he played offensive line at Ole Miss from 1995 to 1998. He was a Rebel from birth – his father Tommy played defensive back at Ole Miss in the 1960’s. He’s lived every aspect of the rivalry. Linebacker Mohamed Sanogo said Luke is the one person in the locker room is completely amped up for the game more than any single player.

“Coach Luke,” said Sanogo, chuckling. “From watching it as a kid, to playing in the game and now coaching the game, this game means so much to him. He gets excited… he likes to feel like he’s back in (the game). It’s cool to see that from a coach.”

Luke is far from the only Rebel that’s grown up around the game. Ole Miss has 35 players on their roster from the state of Mississippi. Senior guard James Patterson, a Mississippi native, described the matchup as a “passion game.” However, those players not from Mississippi have sort of adopted the feeling. To say it means any less to them would be a lie.

The home-cooked nature of the rivalry adds flavor, but it also adds a sense of family. Patterson has a cousin on the team. Sanogo is like many players who has a handful of friends on the Mississippi State squad.

“We avoid talking about scheme. It’s more about ‘how are you doing this season… I’m going to do better than you this game,’ Sango said. “Not too much (trash talk). It’s a friendly atmosphere for me on my end. I don’t know about the other guys, but I just want to have fun.”

Playing on thanksgiving may seem like a chore for some teams. However, Sanogo said the team views it as an opportunity. The Egg Bowl is one of two college games Thanksgiving Day. The national spotlight overshadows the need to play on the holiday.

“The dinner will be at 6:30 on Thursday,” said defensive coordinator Wesley McGriff, speaking of kickoff time. “It’s thanksgiving on the calendar but it’s game day for us.”