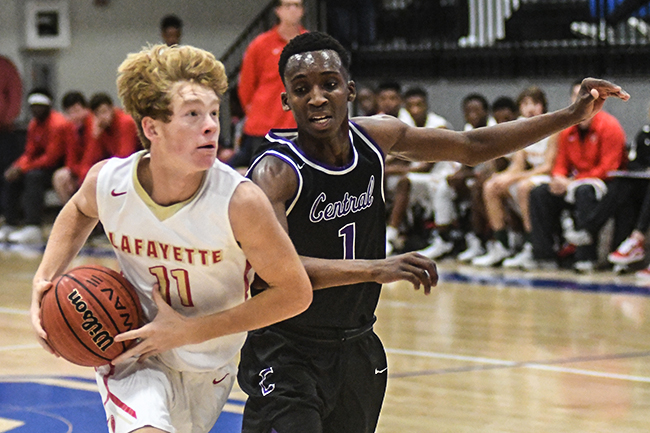 OXFORD — Whether they want to or not, there will be games where Lafayette will have to play four quarters more times than not this season. Early Monday morning was one of those occasions.

The Lady Commodores defeated Minor (Ala.) 51-38 inside the Oxford High gym as part of Oxford’s Charger Challenge to improve to 7-0 on the season. Azariah Buford had a team-high 19 points, Kimaya Dixon chipped in 15 and Mariah Holland scored 11.

As has been the case through the early part of the season Lafayette once again jumped out to a large lead only to have to grind out a victory at the end. The Lady Commodores stormed out to a 21-3 lead over Minor after the first eight minutes of play. They extended that lead by one point with a 31-12 lead at halftime.

“I saw a really good first half where we moved the ball well in transition, played really good defense,” Lafayette girls head coach Shayne Linzy said. “Made really good decisions offensively. In the second half I thought it was the exact opposite. Minor, they applied a little more pressure to us and maybe a couple of our girls got a little tired, a little winded. I think a tale of different halves for us, mentality.”

In the second half the Lady Tigers made things tight with a 18-13 third quarter before Lafayette was able to stretch things back out in the final eight minutes. After a crisp first half, the Lady Commodores were disjointed at times in the second half, allowing the game to be closer than it might should have been.

“I’m getting great experience on my bench,” Linzy said. “The freshman, they’re getting better every day. Even when they have a bad night or when they struggle a little bit, they’re seeing different things every single night. That’s the experience that’s going to help in the end.”

Lafayette was in search of their second win of the season and nearly secured it, but a late surge by Cleveland Central halted it. The Wolves used a 11-0 run in the final minutes of the game to defeat the Commodores 70-63 in the Charger Challenge on Monday.

Lafayette returns to the court on Nov. 27 when they host North Panola.