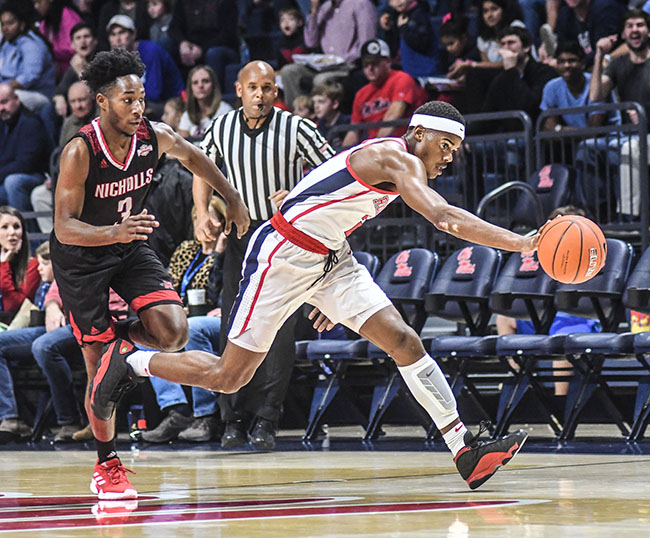 Ole Miss' Devontae Shular (2) comes up with the ball against Nicholls' Kevin Johnson (3) at the Pavilion at Ole Miss on Tuesday, November 20, 2018. (Bruce Newman, Oxford Eagle via AP)

OXFORD – On a night where many of the shots weren’t falling, the Ole Miss men relied on defense to beat Nicholls at The Pavilion at Ole Miss by a score of 75-55.

The Rebels got off to a slow start offensively, but never trailed. At the under eight timeout in the first half, they had connected on only 9 of their first 21 shot attempts. By the final buzzer, they had shot 48.1% but hit only 6 of 17 three-point attempts.

Good news for Ole Miss came on the defensive end of the floor. The Rebels held Nicholls to 33.8-percent shooting and 29.2-percent from beyond the ark. They also forced 14 turnovers. At one point, to close the first half, they held Nicholls scoreless for 5:34 to go on an 9-0 run.

A positive takeaway through the offensive issues was the ball movement. The ball was swinging regularly, even as shots weren’t falling. As more shots began to fall later in the game, the numbers reflected how the ball was rarely dribbling for dribbling sake – Ole Miss had assisted on 21 of 26 made field goals.

“Twenty-one of twenty-six is about as good as it gets,” Davis said. “Sixteen turnovers is too many, but that’s when the ball really moved… that’s the team we’re going to have to be, especially on the road.”

Senior guard Terence Davis led the team in scoring against Nicholls, as he has done in each of the team’s first three games, but the scoring attack was much more balanced. Eight different Rebels saw 14 or more minutes in the game, and all of them scored six or more points. While leading the team, Terence Davis scored only 14 points. Despite his lowest scoring output of the season, Kermit Davis was quick to praise Terence’s defense effort.

“Tonight, that’s the best I’ve seen Terence Davis defend since I’ve coached him,” Kermit Davis said. “He did an unbelievable job on (Jeremiah) Jefferson. One-for-seven, contested all his shots. (He) stuck right to the game plan.”

A point of emphasis for new head coach Kermit Davis entering the season was winning the rebounding battle. Davis said the goal is to out-rebound opponents by eight or more every game. Tonight was the first time in the young season that team was able to decisively win the rebounding battle, racking up a total of 45 rebounds to Nicholls 29.

Next up, the team will head to Destin, Florida for a Friday matchup against Baylor in the third round of the Emerald Coast Classic. The winner will take on the winner of George Mason and Cincinnati on Saturday.