McCuin, Ole Miss ready for Paradise Jam and No. 2 UConn 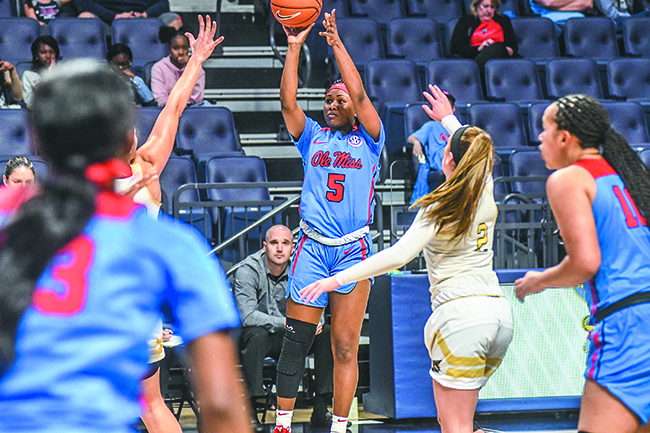 Ole Miss’ Crystal Allen, shooting against Western Michigan at the Pavilion at Ole Miss on Sunday, November 18, 2018, leads the Lady Rebels in scoring at 18 points per game. (Bruce Newman, Oxford Eagle via AP)

OXFORD — Thursday is Yolette McPhee-McCuin biggest game of her coaching career at Ole Miss, but she doesn’t view it that way. The Rebels play No. 2 UConn to kick off the Paradise Jam at the U.S. Virgin Islands. To McCuin, her fifth game at the helm of the program may be against one of the giants of women’s basketball but it is still just another game for them to improve.

“Every game is a big game for us,” McCuin said. “Here is a team that six months ago just got put together. Now, we’re trying to figure things out and we’re only four games in. If I had it my way we wouldn’t be playing UConn four games in.”

The reality is that the Rebels (3-1) are playing the Lady Huskies (2-0) as their first road game of the season. The situation may not be ideal — McCuin was hired after this season’s schedule was set — but the first-year coach and her team will make the most out of a difficult task that awaits them on Thanksgiving.

With the strategy that has been implemented through the first four games of not focusing on the results or their opponent, but improving themselves, keeps the pressure of facing UConn at a minimum. It is still an opportunity to play loose and see what happens.

“When you play the best teams in the country, you get to see where you’re trying to go with it looks like. So, it should be great for the players and us as a staff,” McCuin said.

When the two teams take the court on Thursday (6:30 p.m.) it will be the first time any of the players will have competed against UConn and legendary head coach Geno Auriemma. It will not be the first time for McCuin to have coached or interacted with him.

When McCuin was an assistant coach at Pittsburgh they played against UConn when Diana Taurasi was wearing a Huskies jersey. A few years ago when McCuin was the head coach at Jacksonville she went to Storrs and spent some time under the learning tree of Auriemma. She was able to pick his brain and see what running a perennial Top-5 program involves and what it takes to reach that level of success. It is not an uncommon practice of Auriemma’s to let active coaches come observe, even if that coach’s team is playing UConn in the near future.

“He allowed me to come into practice and I was able to watch,” McCuin said. “He allows anyone to come in. Once you reach out he doesn’t care. He doesn’t care if you’re on their schedule. He’ll let you come in. I took advantage of it. We had exam week and I went up there and I learned a whole lot. I didn’t say much, I kind of just watched and observed and made my own notes. The biggest thing that stood out was the culture. His program kind of runs itself from the way they stretch. They stretch like they want to win a national championship.”

UConn is not the only team the Rebels will play during their weekend at the islands. On Friday they will play Purdue (4-0) and then close out their trip against St. John’s (2-0) on Saturday. Playing all three of those teams would be a challenge on a normal schedule, but the Rebels must play them in back-to-back-to-back days with less than 24 hours between two of them.

McCuin has been trying to manage minutes of her players through the first four games, including Shandricka Sessom who is still not 100 percent recovered from her ACL injury a year ago. This weekend will test the minute management skill of McCuin even harder.

“I don’t think we have any cupcake teams on our schedule,” McCuin said. “It’s an uphill battle every time we step on the floor. So, whenever we can have success in the win column that’s a big bonus for us. …When you have a road game it’s just one game and that’s all you have to focus on. This is like SEC Tournament-type experience you can get.”