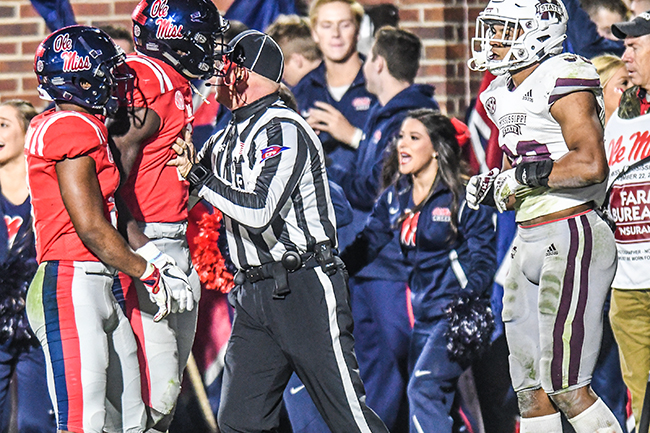 OXFORD – A weird turn of events turned a play that never even happened in to a national media storyline at the end of the third quarter in Thanksgiving’s Egg Bowl blowout.

Matt Corral pumped faked and hit A.J. Brown deep. Brown juked once and carried a handful of Mississippi State defenders into the end zone for what appeared to be the first Ole Miss touchdown of the day. But the play was far from over.

A few Bulldog defenders jabbed with Brown as he headed to the sidelines. Some Rebels joined that group as Brown left, and officials and coaches came in to separate things on the Ole Miss sideline. That much was nothing too unexpected or too ugly for a rivalry game. What ensued after was what changed things.

Mississippi State safety Johnathan Abram threw a slap at A.J. Brown. Brown responded and Matt Corral came flying in. Corral ended up in a tugging match with MSU corner Jamal Peters, who would eventually get into Corral’s facemask and rip the freshman quarterback’s helmet off.

“I just know, when A.J. (Brown) scored, something happened in the far end zone. It got out of control,” said head coach Matt Luke. “We were just trying to get everyone off the field. It’s not what we want.”

Players were eventually separated and the officials met for a handful of minutes. “Unsportsmanlike conduct on all players on both teams” was the official call by the head referee after the meeting.

Every single player on both teams received an unsportsmanlike conduct penalty. By NCAA rule, two unsportsmanlike penalties leads to an ejection. When the officials finally settled things down, four players had been ejected from the game: Ole Miss’ C.J. Moore and Mississippi State’s Jamal Peters, Cameron Dantzler and Willie Gay Jr. were all tossed.

Here’s the kicker: the play never counted. Following a long conversation and the ejections, the referees concluded that Ole Miss didn’t get the snap off before the end of the third quarter. While everyone in Vaught-Hemingway Stadium assumed they were reviewing potential ejections, they were simply reviewing a football play.

In the end, a meaningless touchdown was removed from the Ole Miss line in what would amount to a relatively meaningless game for the Rebel season. For Mississippi State it proved a little more meaningful. Since the brawl, and subsequent ejections, ensued in the second half, three Bulldog players will miss the first half of their bowl game.