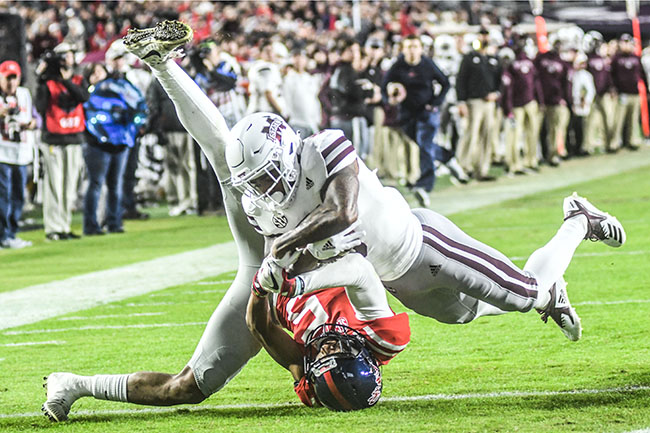 OXFORD — The battle for the Golden Egg was once again a one-sided affair.

In the 115th meeting between No. 18 Mississippi State and Ole Miss, the Bulldogs claimed in-state bragging rights with a 35-3 victory on Thanksgiving night inside Vaught-Hemingway Stadium. Since 2010, the annual Egg Bowl has been decided by more than 10 points five times. The Bulldogs won their second Egg Bowl in the last five games.

Ole Miss ended their season on a five-game losing streak, dropping every game in November — a year removed from closing out their season 3-1 and defeating a top-15 Mississippi State last Thanksgiving.

It was another recipe of an opposing team being able to run the ball at will and the Rebel (5-7, 1-7 SEC) defense unable to do anything about it. Mississippi State (8-4, 4-4) finished with 420 total yards of offense and 309 of them came on the ground.

Nick Fitzgerald ran for 117 yards and two touchdowns to lead the Bulldogs. Kylin Hill ran for 108 yards and a score.

In the first half Jordan Ta’amu injured his hand and went in and out of the game twice. Matt Corral came in for Ta’amu and eventually finished out the game after coming in for a second time in the third quarter. The pair of Rebel quarterbacks combined for 152 passing yards and zero touchdowns.

The biggest issue for the Rebels was their inability to convert a third down. They went 0-for-8 on third down attempts and punted on four of their first six possessions. A fumble and a field goal were mixed in.

Things got heated at the end of the third quarter. After what was originally ruled a 41-yard touchdown catch by A.J. Brown a scuffle between both teams broke out that turned into both benches clearing into the north end zone. In the aftermath, Mississippi State’s Jamal Peters, Cameron Dantzler and Willie Gay were ejected from the game. C.J. Moore was also ejected from Ole Miss’ side.

It was determined the play did not get off before the third quarter expired, erasing the touchdown.