Water Valley returns to North Panola for 3A North Half title 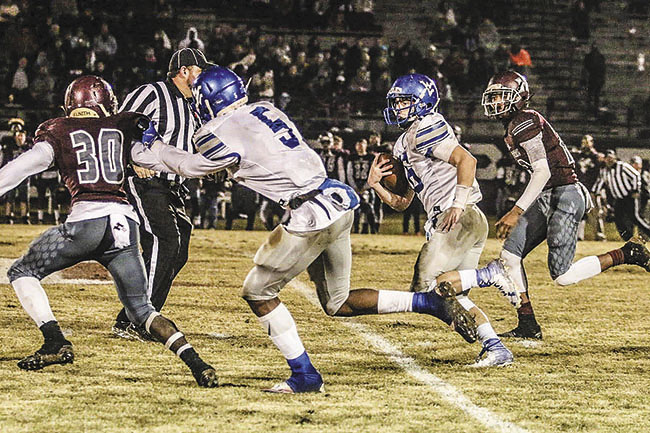 OXFORD — This week has been very unorthodox for Water Valley. So much so that head coach Brad Embry joked with his staff about how strange it was to be focusing solely on football.

That is because the Blue Devils are preparing for a football game during Thanksgiving break for the first time this century.

“We were kidding around and we said we feel like college coaches,” Embry said. “I said ‘no, we’re not recruiting. We’re more like professional coaches, without the million dollar contract.”

The jovial mood in the coaches’ room is one that has spread throughout the field house and onto the practice field. The Blue Devils are loose, but they also know what lies in front of them; a rematch to determine who will go to Hattiesburg next Friday to play for a Class 3A state championship.

After enjoying some turkey and dressing with family and friends yesterday, the Blue Devils will return to Sardis to take on North Panola in the 3A North Half title game tonight (7 p.m., 105.5 FM). It is the first North Half appearance for Water Valley since 1996 and only the third one since 1990. Water Valley won it all 28 years ago.

Getting to this point has been a point of emphasis for Embry since becoming the Blue Devils coach in 2008. He has never wanted to build a good team, his focus has been trying to build a great program.

Two years ago Water Valley finished 2-9 and began to self-reflect. The players and coached decided a season like 2016 would never happened again. Last year they finished with an 8-5 record and reached the second round of the playoffs. Two years removed from the 2-win season, the Blue Devils are currently 12-2 and one of the final four teams in Class 3A.

One good season does not a great program make, but this year could go a long way in getting it to where Embry wants it.

“It’s just a part of the consistency we’re trying to instill,” Embry said. “Doing things right 365 days a year, this is just evidence that it works. I’ve tried to look at each day as an opportunity to get better but you also have to plan ahead. Look one year ahead and two years ahead and see what we can do to be better facilities wise or scheme wise. It can help, it doesn’t always help. Just because you’re good one year doesn’t mean you’re going to have success every year. But we can make sure it’s a positive if we do a good of that.”

This season has already been a success, but the Blue Devils want more. To get more they must get past a North Panola team that defeated them 52-19 four weeks ago. They were leading 19-18 after the first half before North Panola and K.J. Jefferson put up 34 unanswered points the final two quarters.

Facing a repeat opponent presents its share of challenges and just looking at the game film from the first meeting does not always help, Embry knows this.

“You have to look at (North Panola) as a whole and not just that one game,” Embry said. “You have a normal routine and you also have to see how game one went. What went good, what went bad. …I think it’s just execution. Not everything was us that second half. I thought (North Panola) played really well that second half. But, this is another game, it’s a different game. The score of that game doesn’t dictate anything in this game.”

Defense lifts Water Valley past Houston for 3A North…