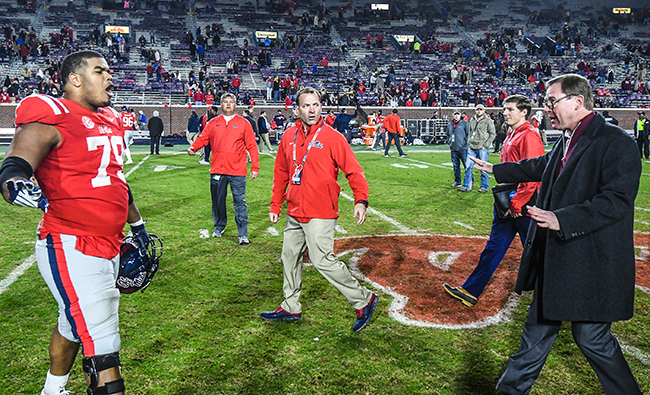 A previously reported, a fight broke out at the end of the third quarter during the Egg Bowl, resulting in the ejection of four players from the game. Everyone not ejected was given a personal foul.

“It remains disappointing to have seen the unnecessary actions during and after the Mississippi State at Ole Miss game on Thursday night. These actions are unacceptable and my concern relates to the bigger issue of the repeated incidents before, during and after games between these football programs,” Sankey said.  “These incidents have become too common in this series. I will require both athletics directors to meet with me at the SEC Office in the off-season to review past issues and develop a plan for the purpose of creating a healthier environment for this annual game.”

The SEC reviewed the brawl, and made some changes to the initial penalties. In addition to the penalties handed out during the game, they ruled that four players should have been called for flagrant personal foul penalties, resulting in immediate ejection. These four players are Johnathan Abrams and Jamal Peters of Mississippi State and A.J. Brown and Matt Corral of Ole Miss.

Despite the fact that flagrant personal foul penalties do not result in suspensions, those four will be reprimanded but not suspended. Two players thrown out of the game at the time of the incident, Mississippi State’s Cameron Dantzler and C.J. Moore were ruled misidentified, and should not have been ejected. Willie Gay Jr. of Mississippi State was properly ejected.

Where does Ole Miss football go from here?