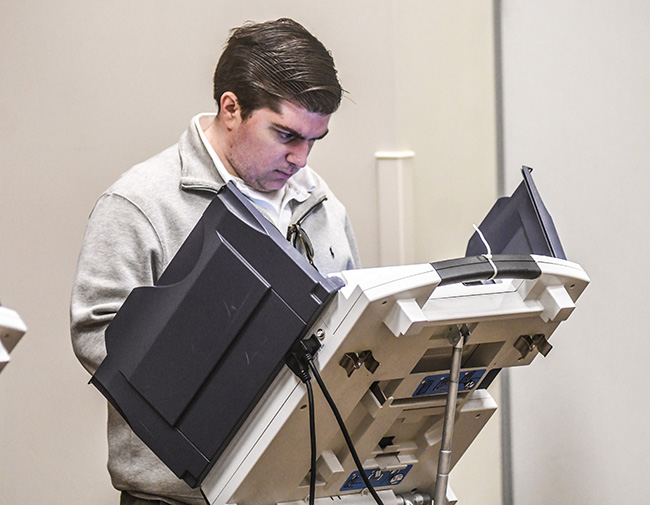 Graham Doty votes at the polls in a runoff election at the Oxford Conference Center in Oxford, Miss. on Tuesday, November 27, 2018. Mississippians are casting their ballots in runoff elections, including a U.S. Senate race pitting Republican Cindy Hyde-Smith against Democrat Mike Espy. (Bruce Newman, Oxford Eagle via AP)

OXFORD – In Mississippi’s controversial senate runoff race, Lafayette County flipped from Election Day as the county, and the state, went with its incumbent senator.

Republican Cindy Hyde-Smith, who was under national scrutiny over controversial comments over the past month, defeated Democrat Mike Espy to become the first woman elected to Mississippi congress.

Several news stations called the race around 9:15 p.m., and the Associated Press called it around 9:25 p.m.

Hyde-Smith, however, was also competing against fellow Republican Chris McDaniel, who only garnered 17 percent of the vote on Election Day.

Espy’s challenged lay in trying to convince Republican voters who voted for McDaniel on Nov. 6 to vote Democratic instead of for Hyde-Smith. Since Election Day, Hyde-Smith has been under scrutiny for comments where she said if a supporter “invited me to a public hanging, I’d be on the front row.”

Hyde-Smith and Espy started the night further apart in Lafayette County than the final numbers suggested. Hyde-Smith raked in 61 percent of the vote, while Espy had 38 percent, with just over half of the precincts reporting.

Espy narrowed the gap as other precincts were counted, and over performed in some other counties, but he never approached further than 45 percent nationally.

“While this is not the result we were hoping for, I am proud of the historic campaign we ran,” Espy said in a statement. “When this many people show up, stand up, and speak up, it is not a loss. It is a moment.”

After the District 18, Place 1 seat also went to a runoff on Nov. 6, Larry Little coasted to victory in Lafayette County over Sarah Liddy, but district wide it was much closer.

Little still took the Place 1 seat, defeating Liddy 53 percent to 47. These results were without absentee ballots or affidavits.

“I want to thank all the people who worked so hard,” Little told reporters. “I look forward to being the Chancery judge.”

But, Liddy’s performances in the surrounding counties – Benton, Calhoun, Marshall and Tippah – brought the final tally to a much closer number.

Little started with a bang, commanding 71 percent of the vote to Liddy’s 28 in Lafayette. Liddy was able to close the gap as more precincts were counted, finishing with the 66-34 percent.

“I want to thank all of the voters,” Liddy said in a texted statement. “I will never forget all the wonderful events I attended, churches where I worshiped, and new friends I made. Best wishes to Larry Little in his new position and to Judge Glenn Alderson in his retirement!”