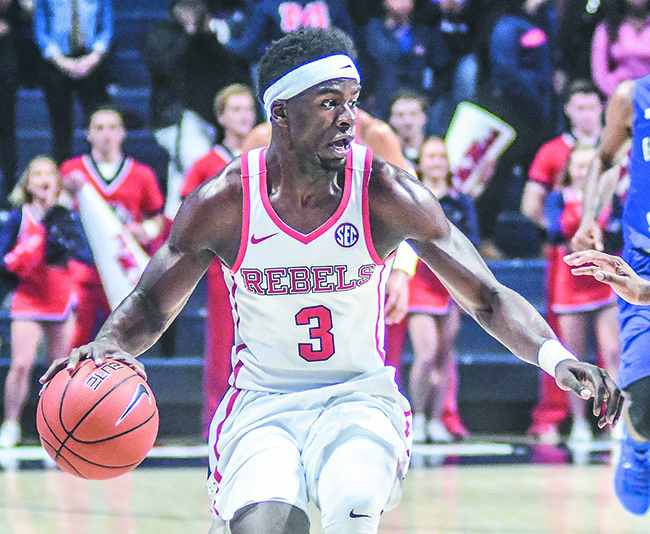 Ole Miss’ Terence Davis II dribbles against Fayetteville State in a preseason game at The Pavilion at Ole Miss, in Oxford, Miss. on Friday, November 2, 2018. Davis was named Preseason Second Team All-SEC as the conference office unveiled the coaches' selections on the opening day of the 2018-19 college basketball season. (Bruce Newman, Oxford Eagle via AP)

OXFORD – Coming off back-to-back challenging non-conference games in Destin, Florida, against Baylor and Cincinnati, Ole Miss basketball is returning home for what appears to be an easier game at home against the San Diego Toreros. However, this game is hardly the pushover many would expect for the Rebels.

San Diego returns four starters from a team that won 20 games last season. At 5-1, the Toreros already have one convincing win over a power-5 team, beating Colorado 70-64 on November 20. Their only loss is a 66-63 defeat in a true road game at Washington.

“Oh man, why’d we schedule that game?” Davis joked. “To me, I think they’re the second best team in the (West Coast Conference) behind Gonzaga.”

Coach Davis said that he expects San Diego to play 99.5% man-to-man defense, one of the more conventional defenses this team has faced. Butler showed a lot of 3-2 zone. Against Baylor it was more of a matchup zone, and Cincinnati is one of the more bizarre, pressuring defenses in college basketball. The opportunity to see strictly man will be good for this team as it prepares for SEC play starting January.

For San Diego, it’s unfortunate in a lot of ways that they play in a conference that contains no. 1 Gonzaga. It’s unlikely that this team will win an automatic qualifying bid to the NCAA tournament in that conference. Regardless, Davis believes this team is a tournament-caliber team.

A struggle for Ole Miss as of late is the offensive lows from Terence Davis, a guy they expect to be one of the leaders on the team as far as scoring. In the two game stretch against Baylor and Cincinnati, Davis scored a total of seven points.

“To me it really is simple to break an offensive slump. You go back and rebound and get yourself to the free throw line,” Kermit Davis said. “He’s got to go be a better offensive rebounder.”

Devontae Shuler and Breein Tyree have stepped up recently, showing the ability to be secondary scorers on this team. However, the Rebels will need Terence Davis to be at his best come conference play, and maybe even Wednesday against San Diego.

Tip-off for the San Diego game from The Pavilion will be Wednesday at 6:30 p.m. and the game will be televised on SECN+.