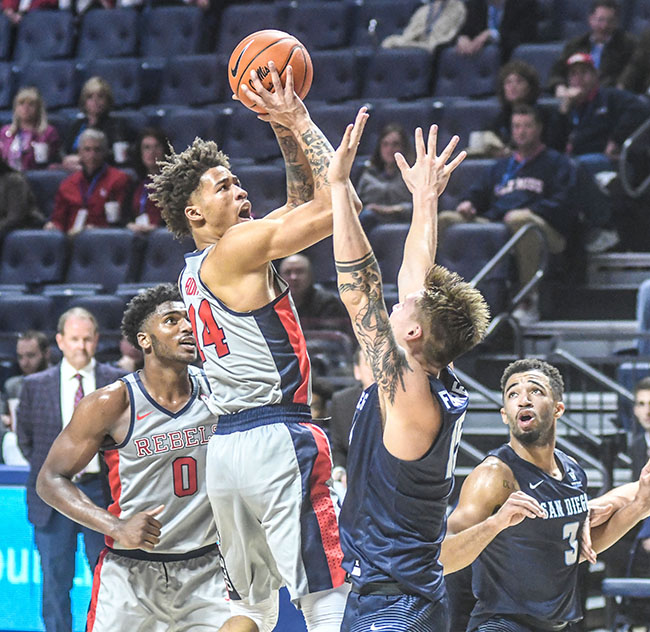 OXFORD – In a return home, Ole Miss rode the energy of a coming-out party for an 18-year-old freshman to overpower San Diego in the second half, winning by a final score of 93-86.

Ole Miss struggled early to both defend the paint – San Diego scored 10 of their first 12 points from inside – and with turnovers. The early insertion of freshman forward KJ Buffen seemed to change the mood. Ole Miss would build a 34-24 lead with 4:40 remaining in the first half before the Toreros closed the half on a 13-5 run to cut the Rebel lead at the break to 39-37.

“Our maturity level, even for older guys, has to get a lot better,” said head coach Kermit Davis. “Our immaturity showed up and we just kind of relaxed… we all understand how games can turn, especially against a team like that.”

San Diego came out ready to play in the second half, cutting the score to one before Ole Miss went on a 9-2 run. They would hold on that small gap the majority of the second half, until San Diego made it interesting late. Junior guard Terence Davis took the blame for the late San Diego push, crediting it to being too relaxed in the time-outs, acting like the game was over: “I was kind of having a little too much fun out there.”

The scoring balance that plagued the Rebels last weekend in Destin corrected itself Wednesday. Junior guard Breein Tyree led the team with 22 points, but five different players scored 13 points or more. It was the best shooting night on the season for the Rebels. Their 61.1% from the floor was a Pavilion record.

Freshman forward KJ Buffen seemed to really establish a bigger role for himself tonight. Buffen checked into the game early and would play 30 minutes in the game, third most on the team. Buffen’s length and athleticism were on display – he was very active on both ends of the ball. He would finish with 15 points and 7 rebounds, both career highs.

“KJ, I’m telling you, his basketball IQ for a young kid is off the chart,” Davis said. “Your role can expand so much when you play different positions… now we’re starting to feel really comfortable with him, even at the (center position).”

With just six games remaining before the start of SEC play, the win advances Ole Miss to 4-2 on the season. Next up for the Rebels, a Saturday meeting with the University of Louisiana at Monroe at 1:00 p.m. from the Pavilion.