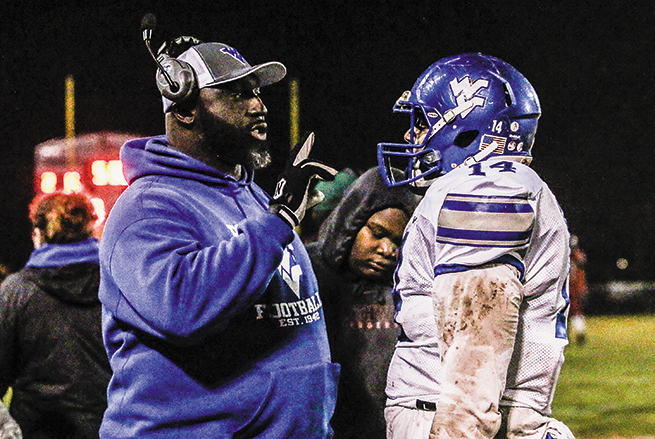 Water Valley assistant coach Bryant Mix, coaching against North Panola in the MHSAA Class 3A North Half Finals in Sardis, Miss. on Friday. Mix played on the Water Valley team that won the state championship in 1990. (Keli Lindsey)

OXFORD — When Water Valley walks into M.M. Roberts Stadium on Southern Mississippi’s campus Friday morning only one person will know what that feeling is like. The last time the Blue Devils played for a state championship, assistant coach Bryant Mix donned the blue and white uniform.

In 1990, Mix was a standout defensive end that helped lead Water Valley to a 15-0 season and their first of what has now become 25 playoff appearances and also on their way to their first, and only, football state championship.

Now, 28 years later in Mix’s 19th season on the Blue Devils’ coaching staff the former player has a chance to lead his alma mater to yet another state title.

“I don’t have any words right now. I’m so excited. It’s unreal,” Mix said immediately after Water Valley’s North Half win over North Panola last week. “I preached to these guys from day one, ‘guys, I want to take my state championship ring, put it up and be able to place another one on my finger.”

It has been a long journey back to the top of the Class 3A mountaintop for Water Valley since that initial state championship, as well as Mix.

After graduating from Water Valley, Mix spent two years at Northwest Mississippi Community College before finishing out his college career at Alcorn State University. From there Mix was drafted 38th overall in the 1996 NFL Draft by the then-known Houston Oilers, spending three seasons in the NFL. After two years with the Oilers, Mix finished up his career with a season in Tampa Bay.

Once retired from the NFL Mix found himself back in Natchez, but home was always calling him and in 2001 he took a job on the Blue Devils’ staff.

“I had the opportunity to move home and I had told my wife at the time that I wanted to come home,” Mix said. “Home was always my thing and I wanted to coach high school football back at home. The opportunity became available and I took advantage of it.”

Mix is the longest tenured coach on Water Valley’s staff — head coach Brad Embry is the second longest in his 11th season — and the love for the Blue Devils is not hard to see when you watch Mix on the sidelines.

The passion has helped Mix, who is the defensive line coach, along with defensive coordinator Jeff Roberts put a Blue Devil defense on the field that is holding opponents to 11.8 points per game this year. Outside of North Panola’s 52 points the Cougars put up on Oct. 26, no other opponent Water Valley has faced scored more than 28 points. That team was also North Panola in last week’s North Half championship.

“What they realized is that we can be as great as we can possibly be and they just believed,” Mix said. “The defensive ends did their job. The linebackers did their job, secondary did theirs. Coach Roberts did a heck of a job of getting things together.”