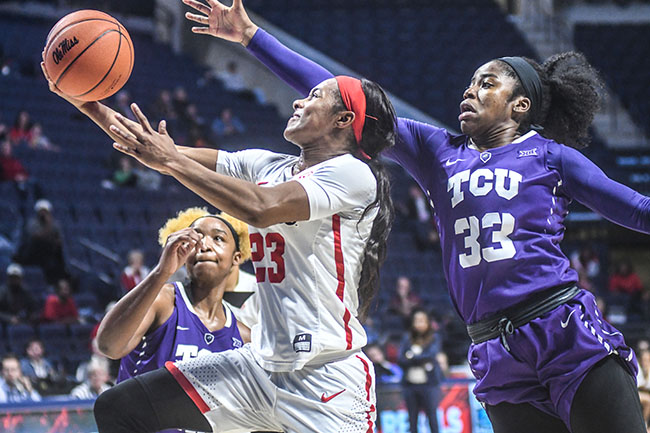 OXFORD – A 23-point offensive explosion in the third-quarter wasn’t enough for the Ole Miss women, as they fell at home to TCU 55-50 in the Big 12-SEC Challenge.

Ole Miss was without their starting point guard tonight, as redshirt freshman Mimi Reid sustained a concussion leaving the bathroom on Wednesday. They played the first half out of their comfort zone, adjusting to the lack of their point guard.

“I just knew we had to try to weather the storm in the first half,” said head coach Yolette McPhee-McCuin. “I knew it would be an adjustment for us.”

Ole Miss trailed the majority of the first half, entering halftime down 29-17. The Rebels made it interesting to start the second half, coming out and starting the third quarter on a 11-2. They would slowly continue to chip into the lead, before taking their first lead since it was 6-7. They closed the third quarter outscoring TCU 23-10, leading 40-39 after three quarters.

The fourth quarter was a back-and-forth contest, with TCU taking a four-point lead into the final minute of play. A three pointer by Shandricka Sessom cut the TCU lead to one with 55-seconds to play, but it was too little too late for Ole Miss. Sessom was really the only Ole Miss player able to get it going on offense. Her 19 points was a season high and her 7 rebounds was a career high.

“We really felt good about our game plan defensively,” McCuin said. “We’re a pretty good defensive team. We just have to get our offense to click, and I promise you guys it’ll come.”

The Rebel women will play again in three days, another chance to get back in the win column after dropping four in a row. They will play Jacksonville State on Sunday at 2:00 p.m. from The Pavilion.