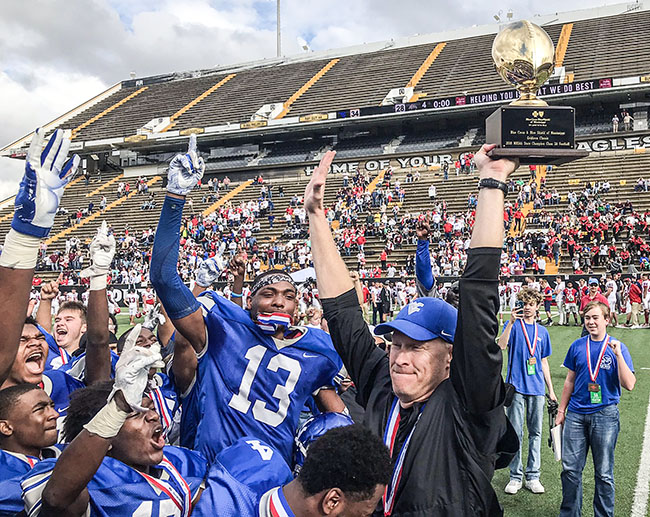 HATTIESBURG — The journey back to the mountaintop is complete. Water Valley is the king of 3A football once again.

The Blue Devils defeated Seminary 34-28 in the win the MHSAA Class 3A state championship at Southern Mississippi’s M.M. Roberts stadium on Friday. The state title is the second in program history and the first since 1990.

As has been the case all season, the potent offense lit up the scoreboard and then the Blue Devils’ stingy defense held off a late surge from Seminary. The Bulldogs (12-4) scored 16 points in the final quarter to give the Blue Devils (14-2) a scare.

“I didn’t expect anything different,” Water Valley head coach Brad Embry said. “We knew what was going on. We knew that (Seminary) was going to run the Wing-T and keep pounding it and keep pounding it. It’s hot out here today and that’s tough on the defense but the conditioning those guy went through to get ready to play a game like this and doing all the little things right is impressive.”

Water Valley’s Jacob Truss saved his best game of the season. The junior quarterback bested his touchdown total from last week at North Panola by one, throwing a season-high four touchdowns. He finished 8-of-10 for 139 yards and also rushed for 64 yards on 17 carries.

Truss also caught a touchdown pass from Martavious Rockett off a 5-yard pass early in the second quarter.

In the final two games of the season Truss threw for 321 yards and 7 touchdowns.

Those four touchdown passes all landed in the hands of the same player. Bud Tolbert had four catches and every one was for a touchdown. He finished the game with 100 receiving yards and was named the game’s Most Valuable Player.

Through three quarters the Blue Devil defense held Seminary to 276 yards and 12 points. The Bulldogs did not roll over and play dead, scoring two touchdowns and sacked Truss in the end zone for a safety to cut the lead to six with five minutes remaining.

Water Valley neutralized two-way threat Nathan Pickering, holding him to 2 rushing yards on a carry. The senior tight end also did not record a catch.

“They played with great effort for the entire game,” Embry said.