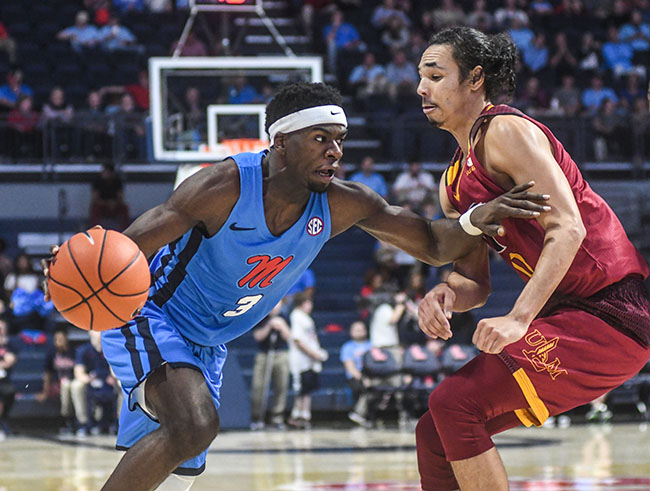 OXFORD – In a day that resembled everything head coach Kermit Davis wants from his offense, Ole Miss ran past the University of Louisiana at Monroe, winning by a final score of 83-60.

For Ole Miss, it was the epitome of a balanced attack. Six players scored six or more points for the Rebels. The ball moved fantastically for Ole Miss; everyone was involved. On 33 made buckets, the Rebels assisted on 25 of them.

“It’s what we’ve been about for years,” Davis said. “That’s a huge stat… when we’re in the locker room and we tell our guys we have 25 assists on 33 buckets made, they get exited. That’s the goal, and it’s got a little bit contagious.”

In addition to the efficient offensive performance, it was also Ole Miss’ best performance on the glass this season. Davis said prior to the season, that the goal was to out-rebound opponents by seven to ten boards a game. Tonight, they out-muscled ULM 41 to 24 on the glass.

“We’ve been the worst rebounding team in the SEC, statistically,” Davis said. “Tonight, 13 offensive rebounds is a start. Terence Davis had three of them. If we can continue that, that’s how you go on the road against top level teams in college basketball and win.”

Ole Miss led this game from the start. In 40 minutes of game time, the teams were tied for 1:06. The Rebels led the remaining 38:54. Ole Miss lead 44-31 at the half and just slowly grew the lead the remainder of the game.

The Rebel pressure defense led to a handful of second-half breakaway dunks, getting the Pavilion to the loudest it’s been on the young season. Players were certainly having fun out there, but Coach Davis may not have been –  a missed 360-dunk attempt by Terence Davis followed up by an intercepted home run pass on the next play had the coach livid.

Through all this, the Rebels are certainly showing signs of improvement. At 5-2, Ole Miss has five games remaining this month before SEC play starts up in January. The Rebels have a week off before traveling to Normal, Illinois next Saturday to take on Illinois State.