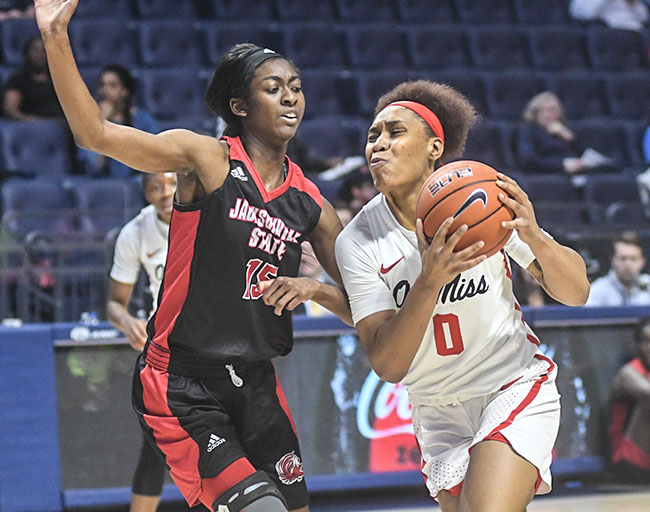 Ole Miss vs. Jacksonville State at the Pavilion at Ole Miss, in Oxford, Miss. on Sunday, December 2, 2018. (Bruce Newman, Oxford Eagle via AP)

The Lady Rebels are in the midst of a five-game losing streak after suffering their latest defeat; a sloppy 60-49 loss to Jacksonville State at the Pavilion on Sunday. The losing skid dates back to their 90-50 defeat at the hands of No. 2 UConn at the Paradise Jam on Thanksgiving.

Every facet of the game was a struggle for the Lady Rebels (3-6) on Sunday. They shot 33 percent (17-of-51) from the floor and committed a season-high 20 turnovers in their second home loss of the year.

“I’m going to have to write a letter of apology to every fan that was out there today,” Ole Miss coach Yolette McPhee-McCuin said after the game. “I thought our level of energy and fight was not one that was reflective of what I want to be represented here at Ole Miss. I’m definitely going to figure out a way to get our players to give more execution and effort. Jacksonville State came in here and just manhandled us for 40 minutes.”

Jacksonville State (4-3) has a defense that is known for making life miserable for the other team, forcing 20.1 turnovers per game. In the first half, the Rebels turned the ball over 11 times due to the Lady Gamecocks’ press. It did not get better in the final 20 minutes with the Rebels committing nine more turnovers.

The Gamecocks scored 24 points off of the takeaways.

“I thought we would have handled it a little bit better,” McPhee-McCuin said of the turnovers. “We tried to get some work on and we didn’t turn it over like that in practice, but I guess we didn’t do a great job of showing what that would look like. Even though they pressured us, that just wore us down.”

After mounting a comeback with a hot start in the first quarter, scoring 20 points, the Rebels cooled off just as fast. In the final three quarters they scored 29 points and cracked double-digits just one other quarter with 13 in the third.

Ole Miss saw their largest lead of the game at the start of the second quarter, a 22-15 advantage at the 9:02 mark. From there, Jacksonville State slowly chipped away before retaking the lead for good at the 6:05 mark of the third quarter.

Crystal Allen led the Rebels with 19 points. Shandricka Sessom followed up her 19-point performance against TCU last Thursday with 14 points on Sunday. Allen and Sessom were the only two Rebels in double figures.

Sunday was also the second game in a row the Rebels were without Mimi Reid. The redshirt freshman suffered a concussion after getting hit by a bathroom door last Wednesday. She was a game-time decision for TCU but sat out both contests since and is still in the concussion protocol.

“If we had Mimi and performed this way then I would think (the loss) was a backwards move (for the team),” McPhee-McCuin said. “But, we don’t and we’re a team who needs everybody. We can’t afford not to have somebody. So, it hurt us tremendously.”