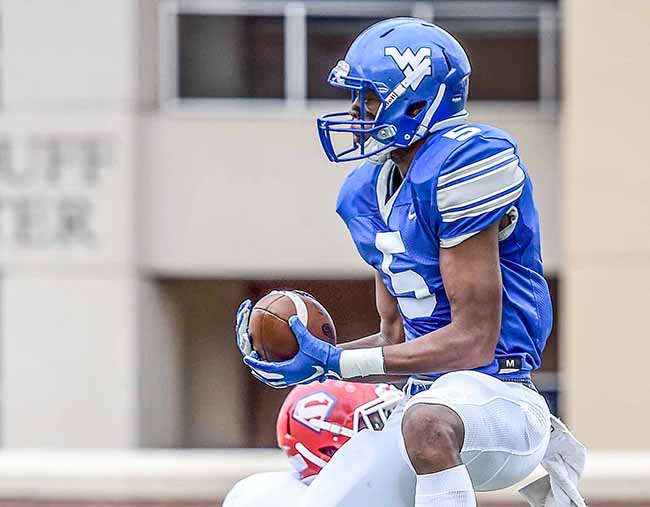 OXFORD — The high school football season came to a close this past weekend in Hattiesburg with the crowning of six new state champions and now the postseason honors begin to roll in. On Saturday the Mississippi Association of Coaches announced their All-State teams for each classification and all three area teams were represented.

Bud Tolbert was named a wide receiver on the First Team offense. The voting was being done before and during the Blue Devils’ game against Seminary but Tolbert’s four catches for 100 yards and four touchdowns helped solidify his spot. Tolbert finished the season with 34 catches for 759 yards and a team-high 12 touchdowns.

Joining Tolbert on the offensive side is offensive lineman Kyjuan Hervey.

Linebacker Javarius Benson was named to Second Team Defense with his team-leading 167 tackles.

Earning Honorable Mentions for Class 3A were linebacker Grant Burress and defensive back Darius Tolbert. Burress finished second on the team in tackles with 112 and had 3 ½ sacks. Tolbert had a team-high seven interceptions.

The Commodores had three players find themselves on the Class 5A All-State team.

Jamie Shaw was selected as a running back for the First Team offense. Shaw finished the season with 1,266 rushing yards and 14 touchdowns. Drew Dabney was selected for the Second Team offense as a tight end, finishing the year with four catches for 67 yards and a touchdown.

Standout athlete Brandon Turnage was picked to the First Team defense due to his team-high seven interceptions. Turnage also finished with 65 tackles.

Two Chargers landed on the Class 6A All-State team in Byron Pearson and J.J. Pegues.

Pearson was named the kick return specialist on the First Team defense. He averaged 23.4 yards in 24 attempts on kickoff returns and 10.4 yards in 27 punt returns. His longest return on a kickoff was 52 yards and had a return of 48 yards on a punt.

Pegues was named tight end on the Second Team offense. Despite missing the final three games of the regular season, Pegues led the Chargers in receiving with 507 yards and six touchdowns off 41 catches. He was third on the team in rushing with 255 yards and nine touchdowns and he also completed two passes for 82 yards and two touchdowns.