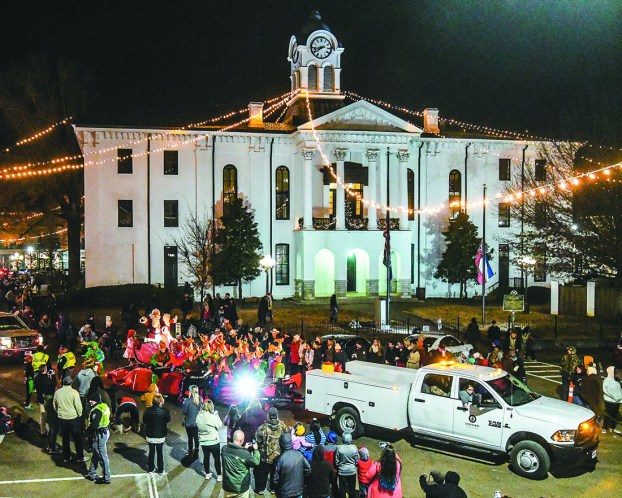 Santa and Mrs. Claus bring up the rear of the annual Christmas Parade in Oxford, Miss. on Monday, December 3, 2018. (Bruce Newman, Oxford Eagle)

Oxford’s annual Christmas parade rolled through the city on Monday, and on Tuesday’s Board of Aldermen meeting, mayor Robyn Tannehill had high praise.

During the meeting, Tannehill said this year’s parade was the “most successful parade” she has seen, and singled out the Oxford Board of Relators the organization that was instrumental in making the parade happen.

“The Oxford Board of Relators stepped up this year to be our organizing group and supplied a huge number of volunteers,” Tannehill said. “I have to say, seeing the parade under our beautiful Christmas lights just made me happy.”

A few of the most outstanding participants were rewarded for their efforts, as well, which were voted on by anonymous judges.

Dr. Lachlan McQueen, with Crossroads Animal Hospital, said it took the hospital about one month to build the float in its entirety and the whole hospital is euphorically proud. He said it was put together entirely by employees, and was inspired by a trip he took to New Orleans.

The Mardi Gras theme stuck with McQueen because of how it’s known for fun, and its vibrant colors. He also said the animal hospital’s staff was being rewarded with lunch on Wednesday.

Last year, Stubblefield Dental Clinic, Servpro and North Mississippi Regional Center were all awarded as the parade’s most outstanding floats.

This year’s parade was given a new route, and the celebration began at the intersection of 5th Street and University Avenue, before turning left onto South Lamar Boulevard. The parade then continued towards the Square, ending at Price Street.

City of Oxford announces promotions in planning and building departments

The City of Oxford has announced separated promotions for two separate employees, and the impending retirement of another. According to... read more