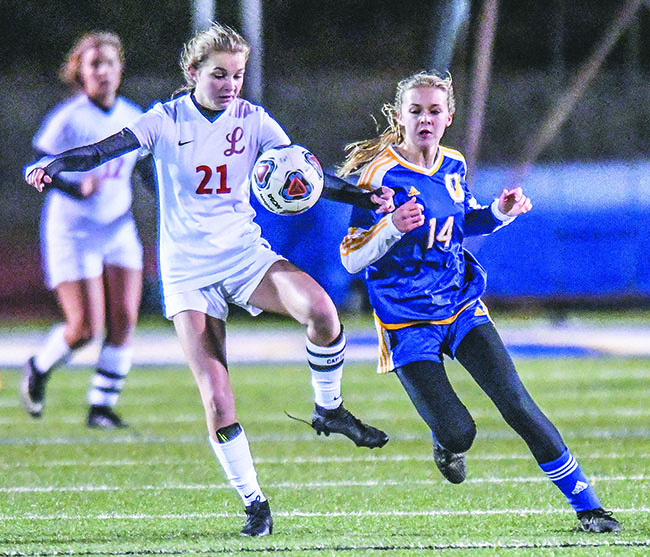 OXFORD — For the only time this season the crosstown showdown between Oxford and Lafayette moved to the soccer pitch on Tuesday. It was a clean sweep for the Chargers with both the boys’ and girls’ teams defeating their rivals. The girls’ match was held at Bobby Holcomb Field and the boys’ match was played at Lafayette’s William L. Buford Stadium.

Heading into the Tuesday’s match the Lady Commodores were undefeated and carried with them a stifling defense that was holding opponents to less than a goal per game (0.7). For the majority of the first half Lafayette was able to keep Oxford, who was averaging eight goals a game, off the scoreboard but Carissa Strum’s goal in the 28th minute opened things up and the Lady Chargers won 3-1.

“Tonight, of course we had goals scored on us, but they still came up big when they need to at times,” Lafayette girls head coach Melinda Scrugggs said. “(Oxford) is a good team and it was a good test for us and I think we did some really good things at times and maybe there’s some other stuff we may need to go back to the drawing board and figure out.”

Strum finished with two goals for Oxford (7-0-1) and Emily Hayward added one in the 54th minute to give the Lady Chargers a 2-0 advantage at the time. Strum’s final goal came in the final minutes to provide the winning margin.

For the past two games Oxford has been without their leading scorer. Senior Morgan O’Connor had to sit out two games due to receiving a red card in their game against Clinton on Nov. 17. It is not the first time Oxford has had to go it alone without O’Connor lurking up top.

“(Lafayette) challenged us, defensively,” Oxford girls head coach Hunter Crane said. “We needed to see somebody with a good defense and it was good that they showed us one. …We had a lot of chances tonight that we just didn’t get on the back end of real well but finally started getting a couple of them there in the end.”

Lafayette (10-1) avoided the shutout with a goal by sophomore midfielder Lucy Wilson in the 63rd minute. Wilson had a prime opportunity to tie the game at 1-all in the 43rd minute but a missed penalty kicked sailed wide right to keep Oxford with the one-goal advantage.

Across town the Oxford and Lafayette boys were playing at the Lafayette the same time the girls’ match was taking place. After a scoreless first half a pair of goal from the Chargers in the second half was enough for the 2-0 win.

Luke Freeman and Max Mobley provided the goals for the Chargers (7-1) with assists from Stone Tosh and Alex Mobley.

Lafayette dropped to 5-6 on the season.

On Friday Oxford opens up Region 1-6A play with matches at South Panola while Lafayette returns to the field on Monday with home games against Strayhorn.