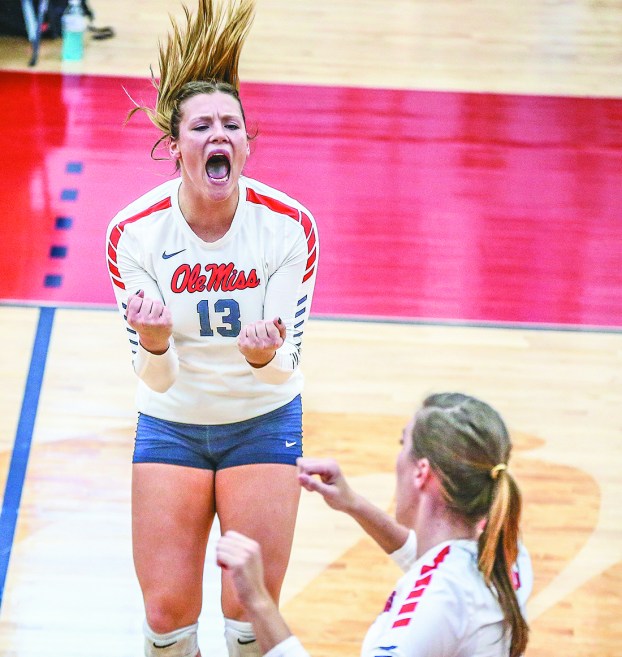 OXFORD – In the third set of Ole Miss volleyball’s senior day win over Alabama, outside hitter Emily Stroup slammed a kill for a point to put the Rebels up 12-10.

To celebrate, the audio man in charge of the music at the Gillom Performance Arena played Alicia Keys’ hit “Girl On Fire.” Probably because Stroup has been on fire for most of Ole Miss’ 2018 season.

That third-set kill against the Tide was her 16th of the match, and she would go on to record 24 kills in the match, which was her 13th 20-kill game of the season.

“I know I’m just one of our go-to hitters,” Stroup said. “Knowing I do put up a lot of points for our team, I think that’s just expected now.”

Stroup cemented her status as Ole Miss’ go-to hitter by setting the program-record for kills in one match three times this fall – ultimately setting the record at 33 in a game – and was second in the nation in kills.

This season-long performance netted Stroup a spot on the All-SEC Team, which is a far cry from where started as a Rebel.

After barely playing her freshman year, Stroup cracked into the regular rotation as a sophomore and took off offensively. The Fargo, North Dakota, native said increased conditioning has helped her improve over her years at Ole Miss, which has led her to slinging spikes at a historic rate.

“I try to hit it as hard as I can in different places,” Stroup said. “I think I’ve gotten better this year, too, at mixing shots.”

Stroup said her improvements directly correlate with her workout regiment, which includes numerous squats, cleans and short sprints. She specifically said she came into Ole Miss recording around nine or 10 feet on a vertical jump test. Now, she hits around 10-feet and three inches.

This, along with coordination she built up as a basketball player in high school, helped her build up her skill set to a become the record breaker she is today.

“She should have a shot at being the MVP of the conference,” coach Steven McRoberts said after Ole Miss’ senior day win. “She’s had that type of year. She’s put a lot of hard work into getting where she’s at.”

However, Stroup would give all that up if that meant playing in the NCAA volleyball tournament.

“I don’t really care about my records,” Stroup said. “I’d give up all of those if my team made it.”

“I just really want to win and have a better record as a team.”

She’ll get another shot next at that next year, as Stroup will take on that senior mantra, saying she needs to work on changing the mindset of the team as a leader in order to help maintain consistency.

“As a team, we can be more competitive in other areas,” Stroup said. “We need more people contributing, and getting as many kills we need. We’re normally really equal in a lot of different statistics.”

In order for the Rebels to find consistency next year, they’ll need to replace the 474 digs and 289 kills by seniors Carolina Adams and Caitlin Wernentin, respectively.

On offense, freshman Aubrey Sultemeier looks to fill the offensive void, as she finished 2018 fourth on the team with 171 kills, while junior Nicole Purcell, who finished third on the team with 259 digs, looks to be Ole Miss’ next libero.

Additionally, the Rebels will add three freshman for the 2019 season – outside hitter Anna Bair, setter Lauren Delo and middle blocker Ava Wampler – and each can help on all parts of the court.

Bair recorded 1,323 kills in high school, which can help jumpstart the offense that struggled with consistency this year.

Delo was the South Carolina 2A Regional Player of the Year, and guided St. Joseph’s High School to Class 2A titles in 2017 and 2018, and can provide depth on the defensive side of the court.

Wampler was Texas Girls Coaches Association 5A/6A All-Star team during her junior year in high school, and will be a tall presence in front of the net as a 6-foot-5 middle blocker.