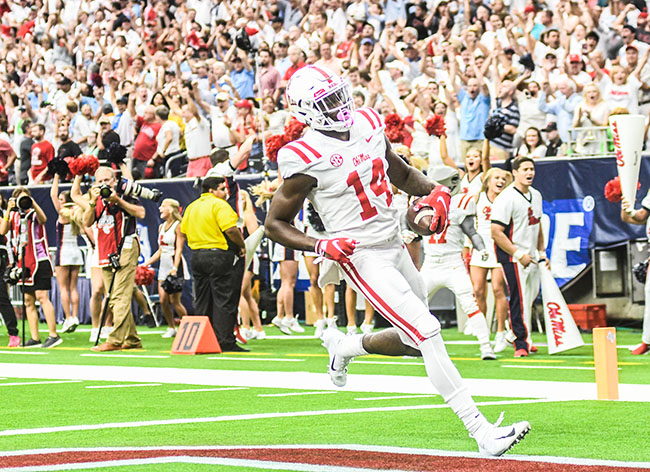 OXFORD – It took D.K. Metcalf just twenty-one games in an Ole Miss uniform to captivate the eyes of the National Football League. The redshirt sophomore declared for the draft the day after the Egg Bowl, and will be foregoing his remaining eligibility at Ole Miss. What may be more of a surprise to Rebel fans, is how highly Metcalf is being talked up in NFL scouting circles.

What makes Metcalf such a prized commodity is his rare combination of size and speed. Most guys at 6-foot-3 and 225-pounds can’t run like Metcalf, can’t release off the line like Metcalf.

“With him it’s speed and acceleration but he’s smooth. His hips are oily, and you can tell he can get in and out of breaks easily,” said Jon Ledyard, the Chief Operating Officer and Senior NFL Draft Analyst for The Draft Network.“He has mobility that a lot of guys with his size don’t have.”

In Ledyard’s eyes, D.K. Metcalf is the best NFL prospect from the wide receiver position in all of college football. CBS Sports’ Chris Trapasso ranks Metcalf as the 20th best prospect in the nation, position independent. Additionally, Sporting News’ most recent mock draft had Metcalf slotted 15th overall to the Indianapolis Colts. The kid has a bright future.

When Ledyard watches D.K. Metcalf, he sees shades of Baylor Josh Gordon. Both were raw coming out of college, but the upside is remarkable. Despite Gordons struggles with off-field issues in the NFL, he recorded a 1,600-yard season back in 2013, when he led the league in receiving despite being suspended the first two games.

“Neither of them developed fully coming out, but both with crazy ceilings. Gordon has obviously become a monster when he’s on the field,” Ledyard said. “With Metcalf, you don’t have to worry about all the stuff that’s kept Gordon off the field. I think that’s Metcalf’s ceiling in the NFL.”

Metcalf is young, and he hasn’t played much. Twenty-one games, combined with an offense that asked him to run a very limited route tree, means there is some projection here. Scouts will have to look at Metcalf’s physical tools and assume they’ll be able to teach him more of what he needs to learn, more than what was ever asked of him at Ole Miss.

“He is raw. He’s dropped some passes. He doesn’t always finish and he’s mistimed some jumps,” Ledyard said. “You’re taking a chance in the draft, that’s part of the deal. I’d want to take a chance on him.”

It’s unlikely that Metcalf’s injury will be much of a concern come draft time. There’s been no official updates, but based on what is out on social media, he looks healthy. The NFL Scouting Combine is in late February, and for a player to decide to leave early, you’d think doctors would have told him he will be healthy enough to test fully by then. Time will tell with D.K. Metcalf.