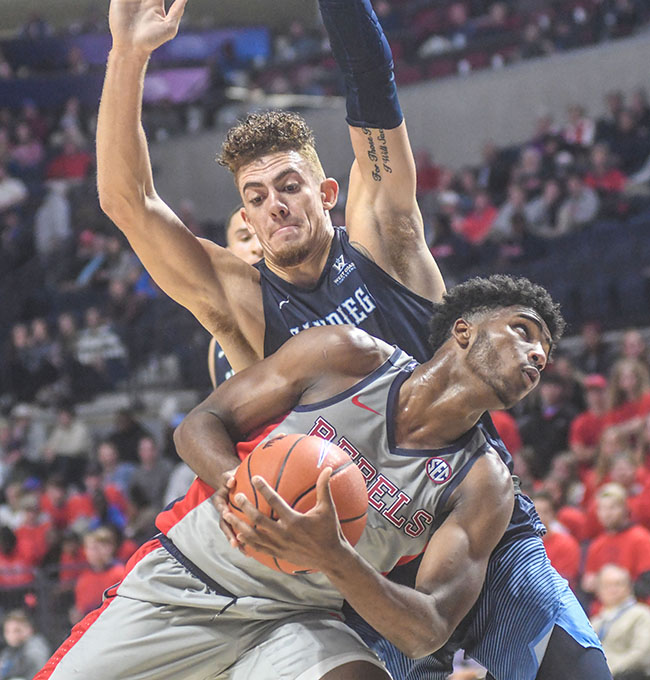 OXFORD – College basketball seasons are long, filled with highs and lows. Tough losses, close wins and blowouts are all teaching moments, especially to a young team like first-year head coach Kermit Davis has at Ole Miss.

Ole Miss hit their first low point on Thanksgiving weekend against Cincinnati, in a 14-point loss to the Bearcats on a neutral floor in Destin, Florida. It wasn’t just the outcome – no team wants to lose by 14, but it happens – it’s how it happened that woke up the Rebel team.

The two games Ole Miss played in Florida, the Cincinnati loss and a win over Baylor, had similar feels to them. One player was scoring big numbers and getting no help from the rest of the team. Against Cincinnati, sophomore guard Devontae Shuler went for 24 points on 9 of 14 shooting. The rest of the team combined for 33 points on 10 of 37 shooting.

“Coach Davis brought me into his office and told me I was turning into a one-dimensional player, that I needed to do more for us to do better. All three pointers aren’t going to help us,” said freshman forward Blake Hinson. “It was a lightbulb moment knowing we’re all going to have to be in on this.”

Hinson shot one-for-five from three in the Cincinnati loss. But he wasn’t the only culprit. Breein Tyree was zero-for-five. The difference: those were the only five shots Hinson took all night.

“Every conversation I have with Blake, individually, is always positive. I told him ‘you’re going to make a ton of threes before you leave here, but you can’t have 75-percent of your shots be threes,’” Kermit Davis said.

The team has rallied from that moment well. In their two games since the loss to Cincinnati, in which they scored only 57 points, the team has scored 93 and 83 in back-to-back games. Both were wins.

Offensively, the ball is moving remarkably better since the Cincinnati game. Against the Bearcats, Ole Miss had three total assists. The two games since, they’re averaging 22.5 assists. Additionally, Hinson is making more of an attempt to shoot from inside the line. After all of his shots against Cincinnati being from three-point land, only 60-percent of his shots the last two games are from downtown.

Getting to this sort of offensive balance is going to be critical for the Rebels moving forward into SEC play. No offense to some of the competition thus far, but you can beat teams like Nicholls State playing bad basketball and surviving on talent alone. Teams like Cincinnati are a lot more like what Ole Miss will be seeing every night in SEC play. The Rebels have five more non-conference games to polish this balance. Next up, a road game at Illinois State, tonight at 7 p.m. on ESPN+.